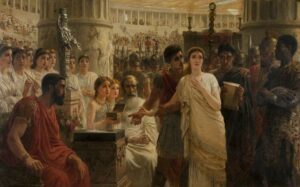 Would you give up your beliefs to live? Or would you die for them? For centuries, people have stood up for what they believe in and in extreme cases even die for it.

In this painting a young Christian woman is being forced by Roman soldiers to give up Christianity for paganism. In a jam packed stadium, the crowds are keenly waiting for her decision.

Although the Roman Empire was vast, it successfully absorbed people from different countries, languages and religions. Rather than focusing on differences, the Romans used religion to promote unity and loyalty in all corners of the empire. All of its citizens were expected to integrate their beliefs with Roman gods and to worship the Roman Emperor.

In the first few centuries after the death of Christ, Christians were a tiny and persecuted religion because they believed in only one God and refused to worship Roman gods. This was seen as bad for society as Pagans believed that by not respecting and worshipping the Gods, revenge would be sought with fire, flood or disease. In some parts of the Empire, Christians faced fierce prosecution and were rounded up and killed as in this painting.

The painting is set in the Roman city of Ephesus, on the coast of modern day Turkey. All eyes are on the central character, a young Christian woman whose expression is heavy with the burden of making a life or death decision. Will she give up Christianity by offering incense to the statue of Diana, the goddess of hunting or will she refuse and be dragged away by the soldiers to be killed? Behind her, a Roman official holds up the certificate which guarantees her freedom as it records she has given up Christianity for paganism. Although her eyes are looking up towards Heaven, her body is leaning towards the altar of Diana. What will she decide? Diana or Christ?

Threats towards Christianity were also felt hundreds of years later in the Victorian period when this picture was painted in 1881. Christians were becoming increasingly concerned at new scientific ideas about the origins of life with the publication of Charles Darwin’s influence books on evolutionary theory and of increasing secularism in society.

Although the Victorians were open to new ideas, many remained god-fearing Christians. Such was the popularity of this painting, that the artist painted two.
The painting that we have on display was originally shown at the opening of Blackburn Museum’s New Art Gallery (now Victorian Gallery) in 1894, loaned by Mrs Thwaites. Alongside the catalogue entry for the painting at the opening exhibition for the New Art Gallery in 1894 was this poem written by J B Greenwood inspired by the scene depicted by Edwin Long RA in Diana or Christ? This excerpt taken from the end of the poem describes the moment that the young lady makes her difficult choice –

“Tempt me no more; not one grain will I cast,
Denying Him who gave His life for mine;
Into his hands my spirit I resign,
Lead on; the bitterness of death is past!”

Diana or Christ? became part of the permanent collection when it was donated at the end of World War One in 1919 as a tribute to the local men who fought and died in a war, which ultimately was about fighting and dying for what you believed in.

The information label on the frame says –

A tribute of admiration to all those of Blackburn who went forth to battle for their King and Country’s cause and who by their self-sacrifice and gallantry helped to achieve a glorious victory in the Great War 1914 – 1918.

When the painting was displayed in 1919 visitors were given leaflets which helped them to interpret the painting and understand its relevance to them. The young lady featured in the painting is sacrificing her life for her beliefs just as the soldiers who fought sacrificed their lives for our futures –