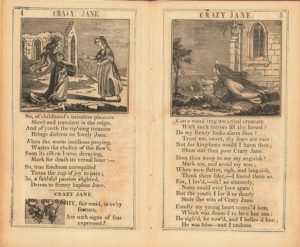 Crazy Jane brings us to our last example from the chapbook collection of John Henry Spencer. It brings together many strands of the genre, and introduces us to one of the most important figures in the genesis of the form, James ‘Jemmy’ Catnach (1792-1841). Jemmy Catnach was born into a family of printers in Alnwick, Northumberland. His father, John, produced high quality work collaborating with the most famous engraver of the time, Thomas Bewick. Best known today for his History of British Birds, Bewick’s detailed and naturalistic work appeared in John Catnach’s most successful publication, The Poetical Works of Robert Burns, published in 1808.

Despite this and other successes, John Catnach failed utterly as a businessman and ended up in London in debtor’s prison, while his wife and son carried on the business with a wooden printing press and some broken type. They set up shop in 7 Dials, the London centre for the production of cheap print.

James Catnach proved much more entrepreneurial than his father and printed a wide variety of material. Catnach printed broadside ballads, many of which he bought from other printers, chapbooks, political satire, gallows confessions and accounts of murders as well as pioneering the production of books aimed specifically at children. His biographer, Charles Hindley, recounts that Jemmy sometimes fell foul of the law, and was imprisoned for libel against a butcher for a ballad he penned called ‘The Dog-Meat Man’, as well as pirating the works of other perhaps more sophisticated publishers. 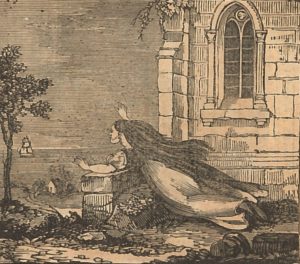 Spencer’s edition of Crazy Jane is an amalgamation of the various media in which the story appeared. Roly Brown’s excellent article, ‘Notes on The Death and Life of Crazy Jane’[1] unravels the complicated stemma of this work. The story of Jane, which recounts her descent into madness after she is seduced and then abandoned by Henry, her feckless lover, has an identifiable source, Matthew ‘Monk’ Lewis, the author of The Monk, one of the most famous of all gothic novels published in 1794. The story of the poem’s creation is perhaps apocryphal, but it is recounted in Margaret Baron-Wilson’s 1839 book, The Life and Correspondence of M.G. Lewis. In 1796, Monk Lewis was visiting the Duke of Argyll at Inveray Castle, where he fell in love with the Duke’s daughter, Lady Charlotte. His infatuation was not returned, but an incident which occurred while he was out walking with Lady Charlotte may have prompted the composition of the verses. While on their walk, Lewis and Lady Charlotte came across a poor woman suffering from mental illness. Lady Charlotte was very distressed by the encounter, and Monk Lewis had his inspiration, perhaps tempered by his own disappointed heart.

The Bodleian Library’s collection of broadside ballads[2] contains multiple versions of Crazy Jane, produced in a variety of single sheet formats, some of which carry a woodcut. There are 26 different versions listed; they were printed in London, Preston, Newcastle, York, Nottingham, Liverpool, and even the shop of Catnach’s successor, W. S. Fortney (‘General Steam Printer and Publisher, Monmouth Court, Bloomsbury).

There are many chapbook editions appearing from the late eighteenth century. A popular version is one produced by Sarah Wilkinson, one of our previously featured authors on the blog. The History of Crazy Jane, with a frontispiece by Bewick was published as early as 1813 by W. Davison, Jemmy’s father’s former partner in Alnwick. The version which appears in Spencer’s collection was produced in the 7 Dials, but the book carries the name of neither author nor printer. However, Jemmy Catnach is the likely source. The chapbook format contains narrative which supplements the core plot of Jane’s seduction, break down and death, but also contains the original ballad in verse form.

We’ll close with an excerpt:

Why fair maid in every feature,
Are such signs of fear expressed,
Can a wandering wretched creature,
With such horror fill thy breast.
Do my frenzied looks alarm thee,
Trust me, sweet, thy fears are vain,
Not for Kingdom would I harm thee,
Shun not then poor crazy Jane.

Fondly my young heart believed him,
Which was doomed to love but one;
He sighed, he vowed, and I believed him,
He was false, and I’m undone.
From that hour has reason never,
Had her empire o’er my brain,
Henry fled, with him for ever
Fled the wits of Crazy Jane.