The Good Farmer, or the entertaining History of Thomas Wiseman, c. 1835

This image shows a double page advertisement found at the opening of this chapbook, The Good Farmer, or the entertaining History of Thomas Wiseman; Who Procured Riches and a Good Name, by the Paths of Virtue and Industry. While the subtitle tells us all we need to know about the slim plot of this book, the advertisement tells us much about both the method of production for this little book as well as market prices and the stable of other titles available from the publisher, J. G. Rusher. 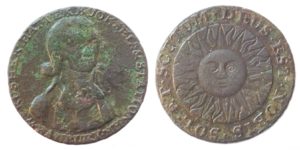 Rusher’s was a family business in Banbury, Oxfordshire in operation from the early eighteenth century. The family business began as a broader concern as evidenced in this eighteenth century ‘Conder’ halfpenny provincial token. The token was produced by W. Rusher Hatter, Bookseller & Stationer Banbury. On the reverse is shown the arms of the borough of Banbury (a radiating sun), and that the token is ‘payable at Banbury Oxford or Reading’. Rusher’s also had a shop in Reading run by James Rusher, William’s brother.

The little advertisement printed onto the back of the original soft blue paper front cover and the first page of this chapbook (c. 1835) shows the process of production. The compositor stands in front of his boxes of type, setting the page for print, after which the frame will be locked into place ready for printing. You can see the newly printed pages hanging up to dry at the back of the picture. The seated man is preparing the sheets in the final stage of inking. In The Good Farmer, the pages with images do not carry print on the verso side. This is probably because the paper was not of sufficient quality to sustain the printed image without some leakage through to the verso.

One of the virtues that Rusher’s claims for their chapbooks is that they are ‘adorned with a great number of Cuts’ (wood cut images). As we’ll see in the next post, printers like Rushers often reused images in a variety of different productions. All of Rusher’s books sell for 1d (one penny), and ‘may be had of the Person who sells this’, ie the chapmen who carry the books amongst their other wares. ‘Rusher’s fam’d Warehouse’ where the books were made, also sold ‘Pictures, and Toys’… ‘For youth of all ages… For rich and for poor’. It was a successful family firm that stayed in business for several generations. Spencer collected a few Rusher’s books: Cinderella, Poetic Trifles; or pretty Poems for young people, and Life and Adventures of Robinson Crusoe, (in 16 pages), all from the first decades of the nineteenth century. The Good Farmer, however, is an extremely rare book, with only 4 other copies known in libraries worldwide.