The Spectres of Lord Oswald and Lady Rosa 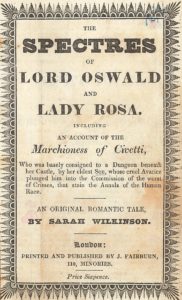 Sarah Scudgell Wilkinson (1779-1831) was a prolific professional writer who produced over 100 chapbooks and short works of fiction as well as 29 novels mostly of the gothic type designed specifically to appeal to female readership. Wilkinson states her purpose explicitly in the preface to one of her gothic novels. She wrote:

“Authors are, proverbially poor; and therefore under the necessity of racking their wits for a bare subsistence. Perhaps, this is my case, and knowing how eager the fair sex are for something new and romantic, I am determined on an attempt to please my fair sisterhood, hoping to profit myself thereby. If the following volumes tend to that effect, I shall be gratified; but if they meet with rapid sale, and fill my pockets, I shall be elated.” (Preface to The Spectre of Lanmere Abbey; or, The Mystery of the Blue and Silver Bag: A Romance. See Diane Long Hoeveler’s article, Sarah Wilkinson: Female Gothic Entrepreneur, Marquette University, 2015)

Wilkinson is highly unusual not only for stating a commercial purpose to her writing, and the identification of her target market, but also to be known at all as the author of chapbooks, which were almost completely anonymously produced. Her life appears to have been a difficult one; she lived in London and supported her mother, and her daughter, Amelia, who may have been illegitimate. Wilkinson managed to survive as a writer during the popularity of gothic fiction, but when enthusiasm for the gothic turned, Wilkinson began to produce children’s books. Over her literary career, Wilkinson engaged with no less than 25 different publishers, ran a ladies’ circulating library and various schools for children. A series of appeals for funds to the Royal Literary Fund for support survive, documenting a life-saving series of £5 gifts. She lost her fight against breast cancer after several terrible operations and died in the Saint Margaret’s workhouse in Westminster in 1831. 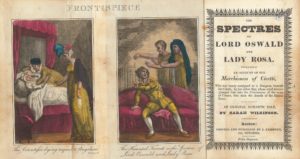 The Spectres of Lord Oswald and Lady Rosa, includes an extensive subtitle: including an account of the Marchioness of Civetti, who was basely consigned to a Dungeon beneath her Castle. By her eldest Son, whose cruel Avarice plunged him into the Commission of the worst of Crimes, that stain the Annals of the Human Race. The plot contains almost every possible gothic trope: murder, attempted rape, an Italian castle, a dispute between brothers, ill-judged disinheritance, secret imprisonment, children stolen at birth, secret adoption, supernatural visitations, confessions and forgiveness. Diane Hoeveler points out that Wilkinson also ‘borrows’ freely in this (and many other stories) from popular gothic authors including Clara Reeve (The Old English Baron), Eliza Parsons (The Castle of Wolfenbach), Mrs Radcliffe (Sicilian Romance), and Matthew ‘Monk’ Lewis (The Castle Spectre).

Spencer’s collection contains 5 further chapbooks by Sarah Wilkinson, The Marriage Promise; or, The History of Emma Woodley published in 1803, Kenilworth; or A Tale of the Inn: a Romance of the sixteenth century: by the celebrated author of Waverley, and Ivanhoe, (This work is described as ‘epitomised’ by Sarah Wilkinson from the original by Sir Walter Scott.), The Castle of Montalbino, or The Orphan Sisters, The Castle of Oravilla; or, The Unnatural Guardians, and Woodland Cousins; or Agnes and Ellinor. A Rustic tale in which is exemplified traits of a disposition and temper of two females; affording a stirring example of the effects of envy, all published c. 1810 by Dean and Munday and J. Bailey, London.