9 June 2020
By Professor Michael Slater
Michael Slater is Emeritus Professor of Victorian Literature at Birkbeck College, University of London, former Hon. Editor of The Dickensian and a Past President of the Dickens Fellowship. He is the author of several books on Dickens including Dickens and Women (1983) and Charles Dickens: a Life Defined by Writing (2009). 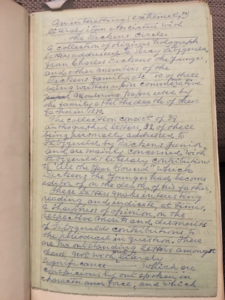 Undoubtedly the most remarkable item in James Dunn’s Dickens Collection is an album originally belonging to Percy Fitzgerald which Mr Dunn presented to Blackburn Library in April 1942 the contents of which are heavily and meticulously annotated by him (unfortunately in fading pencil). Included in the album are 32 letters from Fitzgerald to Charles Dickens Junior (‘Charley’) who on his father’s death took over the editorship of Dickens’s journal All The Year Round to which Fitzgerald continued contributing frequently.

There are also a number of letters from Charley to Fitzgerald including a furious one denouncing him for ‘an outrageous breach of faith’, i.e. publishing an article depicting Dickens’s father as financially irresponsible and sponging off his son. Fitzgerald calmly responds that Dickens himself had already portrayed his father as the impecunious Mr Micawber in David Copperfield. Of Charley himself Fitzgerald comments that it was hard that no drops of ‘the old Boz liquor came to him: a writer he certainly never was’.

The album also includes several photographs of Dickens taken at his home Gad’s Hill and (a very rare item) a letter to Dickens from a friend and fellow-writer, ‘Barry Cornwall’ – rare because Dickens systematically destroyed all his correspondence once dealt with.
Not the least interesting items in the album are printed excerpts from bookseller’s catalogues pasted in by Dunn and relating to Dickens items. One such catalogue excerpt includes a lengthy transcript of an interesting letter about Charley’s education written by Dickens to his son’s schoolmaster Mr King of which only a brief extract has hitherto been known. 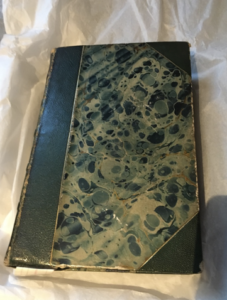 For Mr Dunn, however, the most exciting item in the album was a sheet of headed Gad’s Hill notepaper on which is written in what he believed to be Dickens’s hand notes for a story about a ‘lonely man’ who visits ‘a Cathedral town’ where live two sisters and an ‘ill-conditioned youth’, presumably their brother, who ‘has a great lawsuit’. The man loves one sister but marries the other ‘out of gratitude’ for her nursing him in sickness but then she dies, the other sister returns and he marries her (‘she behaves wonderfully’). The youth, ‘who always hates him …comes to House’ where ‘People speak to him’ and his eyes are ‘opened at last’. There are certainly some recognisable Dickensian themes here but the details do not correspond to any published story by Dickens and inserted in the volume is a 1965 letter from the Editors of the Pilgrim Edition of Dickens’s letters to the then Blackburn Librarian categorically stating that the manuscript is not in Dickens’s hand. It is nonetheless a very interesting item, testimony to the fact that Dickens’s literary guests were certainly not expected to be idle when visiting Gad’s Hill.

Another curiosity in this fascinating album are some letters to Fitzgerald from Marie Dickens, wife of Dickens’s son Henry, about her visits to French sculptor Jules Dalou, who was in exile in London during the 1870s, about a statue. The subject is not named. It would be astonishing indeed if it were to have been Dickens since in his will he had expressly forbidden any such memorial (which did not prevent Fitzgerald himself from sculpting a bust of him now to be seen in the courtyard of the Prudential Buildings in High Holborn).