‘Spot the Birdy 3 – The Red Kite’ by Stephen Irwin 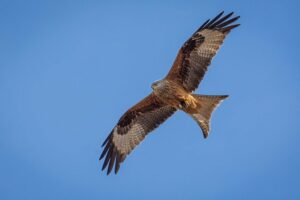 There is nothing else in the UK quite like a Red Kite. In the Middle Ages, they were a common site around towns and cities, feeding on carrion and rubbish but persecution gradually reduced their numbers until by the twentieth century their last stronghold was in mid-Wales. It was here in 1977, on a biology field trip, balancing precariously in a bog, trying not to get any wetter than I already was that I first saw a Red Kite, away in the distance.

The population in Wales slowly grew in numbers, aided by feeding stations, and in the 1980s and 90s birds were reintroduced to other parts of the UK. Freed from persecution (other than by gamekeepers, where they are vulnerable to poisoned bait) they have thrived and today they are a common site wheeling lazily over the M40 motorway and you can see them in most of Britain.

The Red Kite is a large bird of prey, with a near six-foot wingspan. It is an elegant bird and has a deeply forked tail, unique among the birds of prey. Its wings and body are the deep red colour that give the bird its name; combine this with bold black and white wingtip feathers for a very striking animal. 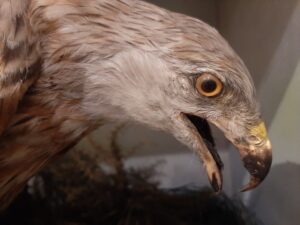 Our specimen is rather pale and it might be a juvenile.

My last encounter with a Red Kite was a couple of years ago and happened as I drove into Bolton. Just north of Belmont a large bird of prey flew across the road and while I only caught a brief glimpse of it, I remember thinking “that’s a big buzzard”. I must have offended the animal because two days later, as I drove out of Belmont, I saw it again and this time, as if to make sure I didn’t misidentify it again, it banked towards me so that I could clearly see its long, elegant wings and forked tail before it flashed over the roof of my car and was gone.

I was so excited. As soon as I reached home, I just had to tell someone and phoned the Museum. I have to say that Tahira was very patient and calmly listened to my enraptured burbling.

So they are about, even in Greater Manchester, but failing the real thing pop into the Museum and have a look at ours.