‘Spot the Birdy 4 – The Great Crested Grebe’ by Stephen Irwin 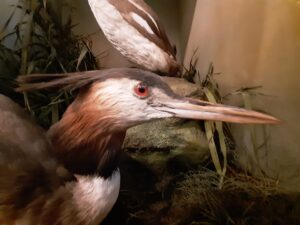 My final choice from the birds on display from our collection is the Great Crested Grebe, known in my household (for the sake of brevity) as the GCG.

Most large bodies of water around Britain will have at least one pair of these beautiful, elegant water birds. In their summer breeding plumage, they have striking orange and black feathers on their heads. This plumage brought the species close to extinction in Britain in Victorian times and led to the founding of the Royal Society for the Protection of Birds (RSPB) in 1889.

The Great Crested Grebe is the largest of the grebes. A group of birds that feed on lakes and rivers, hunting for fish. It has a white body and brown wings. In the breeding season, its head carries the striking plumes that came close to bringing about its downfall. It has a spear-shaped bill and disconcerting red eyes.

It is a weak flier, trailing its legs that are far back on its body, making it clumsy on land but it is underwater that it is truly in its element. It is a powerful and agile swimmer catching small fish, frogs and insects to eat. 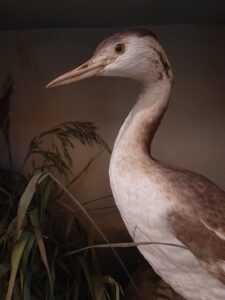 It is well known for its elaborate courtship displays at the beginning of the mating season. Nesting on the water’s edge it only lays two eggs. Unusually, the chicks, which are striped black and white, like fluffy mint humbugs, can swim and dive almost from birth. When they fancy a rest, the chicks will clamber onto the backs of the parents and hitch a lift.

The word ‘cute’ is somewhat overused nowadays but I have to say that in the case of grebe chicks it definitely applies.

Our display case contains two specimens, both adults, one in summer plumage and one in winter plumage. Come and have a look at the bird whose fate helped to start a conservation revolution.