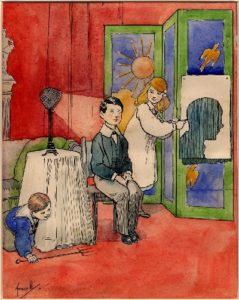 John Hassall (1868-1948), Coming Events Cast their Shadows Before, watercolour and ink on card. On loan from Towneley Hall Museum and Art Gallery.

4 May 2020
By Dr Cynthia Johnston, Institute of English Studies, School of Advanced Study, University of London

John Hassall (1868-1948) was a central figure in both poster design and children’s book illustration from the late 1890s through the Second World War. Like many of the other artists in Edwin James Hardcastle’s collection of original art for book illustrations held by Towneley Hall Museum and Art Gallery, Hassall’s training as an artist took place abroad; in Hassall’s instance this was study in Antwerp under Charles van Havermaet, and in Paris, at the Académie Julian, under Bouguereau and Ferrier. Hassall’s first employment after he returned from Europe was with the advertising firm, David Allen & Sons, for which he produced hundreds of poster campaigns during the last decade of the century. 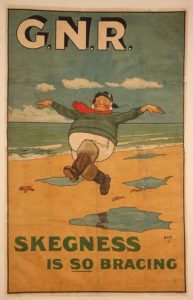 Poster, GNR. Skegness is So Bracing by John Hassall, 1908.

Hassall became known as the ‘Poster King’, and a quick look at his work reveals his exceptionally skilful use of colour, form and precise messaging. Although Hassall’s most enduring image is probably from his tourism campaign, ‘Skegness is SO bracing’; those he created for Kodak (‘The Kodak Girl’), Colman’s Mustard, Nestle’s Milk, the British Vacuum Cleaner Co., Bisto Gravy, Sunlight Soap and Andrew’s Liver Salts represent iconic advertising images from the first half of the twentieth century.

Hassall is also remembered for his distinctive posters for the theatre, producing his first in 1895 for the popular musical, The French Maid, in yellow and black for David Allen. 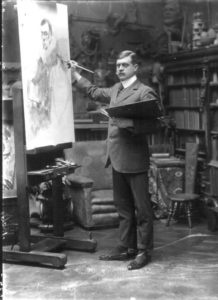 John Hassall photographed in his studio on 24 July 1909.

Hassall’s work also appeared in a great variety of magazine formats, including those aimed at the juvenile markets. Some of these included: The Graphic, The Idler, Illustrated London News, The Strand Magazine and Tatler, and the children’s magazines: The Boy’s Own Paper, Judy, and Little Folks as well as many others. He was also a popular illustrator for children’s books. In 1900, Hassall opened the New School of Art and Poster Design in Kensington. When the First World War broke out, he transformed his offering to a correspondence course, The John Hassall Correspondence School, which was extremely popular. Hassall’s change in delivery is much the same as ours at the university as we shift our usual onsite lectures and seminars to online platforms.

In the context of Hardcastle’s collection, Hassall’s work is well represented with 14 examples. Of these, one is a study (Trees, ill245), and the rest seem destined for children’s book illustrations as opposed to poster art. Of the just over 500 items in the Hardcastle Collection, most of the artists whom Hardcastle seemed to favour have between 8 and 12 entries. Cecil Aldin, whom we will discuss next time, has 8, Ralph Caldecott, 8, Harry Rountree 11. However, the artist with the most entries in Hardcastle’s collection is H.M. Brock with 34 examples of his work represented. Although it is certainly Brock’s work as an illustrator that Hardcastle bought, including his work for editions of Little Women, Ben Hur and Pilgrim’s Progress, H. M. Brock is best remembered for his poster art, much like John Hassall. Perhaps it was these artists’ ability to capture form, colour and emotion with panache, yet simplicity, that appealed so much to Edwin James Hardcastle.