The James Dunn Collection by Dr Cynthia Johnston: A Niewe herbal, or historie of plantes

Rembert Dodoens, A Niewe herbal, or historie of plantes 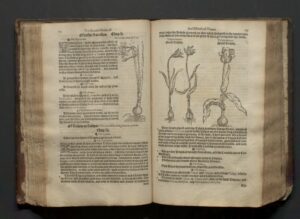 Rembert Dodoen, A Niewe herball, or historie of plantes, printed by Loë Antwerp, 1578, sold in London by Garret Dewes. On loan from Blackburn with Darwen Library and Information Service.

Rembert Dodoens (1517-1585) was a Flemish physician whose principal work, A Niewe herbal, or historie of plantes, translated into English in 1578, was the most translated book after the Bible during the sixteenth century. Dodoens had trained as a physician, and developed a very successful practice in his native town, Mechelen. He rose to become the court physician of the holy Roman Emperor, Maximillian II. At the end of his practicing career, Dodoens was appointed as professor in medicine at the University of Leiden.

The medicinal properties of plants were of course central to the practice of medicine in sixteenth-century Europe. This was the period of the European ‘discovery’ of the Americas, and there was great fascination with the flora and fauna that was encountered there. It was also the century of the printing press, following the introduction of mechanical moveable type into Europe by Johannes Gutenberg (c. 1400-1468) in 1439. These developments, along with further technical innovations associated with wood block printing, combined to produce demand for ‘herbals’; illustrated compendiums which detailed the medicinal properties of plants. 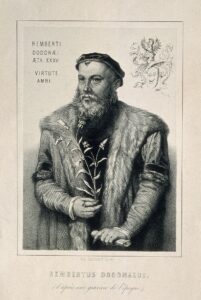 Many of the first herbals were produced in Germany. Rembert Dodoens followed in this tradition, but what distinguished Dodoens’ work was that it was written and published in his vernacular (Dutch) as opposed to the traditional language of medicine, Latin. In this he followed the example of Bernard von Breydenbach who had published his Gart der Gesundheit in German in the preceding century (1485). A copy of this famous herbal is part of Robert Edward Hart’s collection in the Blackburn Museum. [1] Dodoens also decided to group plants into six groups, instead of presenting them in alphabetical order. These elements made his work accessible to those outside medical and academic circles. It appeared at a moment of immense cultural interest in the natural world, and its accessible design resulted in a best seller engendered by the printing revolution. Originally published as the Cruydeboeck, it was first translated into French in 1557. Dunn’s copy is in English, translated by Henry Lyte from the French in 1578. It was lastly translated by Dodoens himself into Latin in 1583, reversing the usual translation descent.

James Dunn’s copy of the Dodoen’s Niewe herbal is in excellent condition, although it is probably not in the original boards. The crisp illustrations and summations of each plant’s properties demonstrate its enduring appeal to collectors today, as well as its original readers.