THE MONOCHROME MUSEUM: Object No. 26 – Shaws of Darwen Vase

THE MONOCHROME MUSEUM: Object No. 26 – Shaws of Darwen Vase 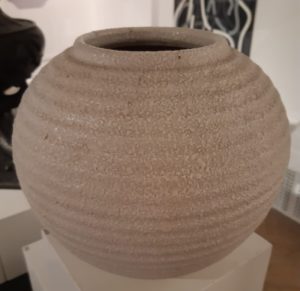 In the first of our Monochrome Museum blogs we are looking at the Shaws of Darwen vase and how it relates to the development of architectural design during the 20th century.

By the 19th century, Darwen was an important manufacturing centre. While industries such as paper making and cotton spinning accelerated the growth of the town; the resource rich landscape also supported a long history of coal mining and stone quarrying. As the local coal seams were slowly worked out, shafts sunk to extract coal were exploited to access seams of fire clay. By 1900, companies such as Shaws Glazed Brick Co Ltd were reworking collieries to extract fire clay to produce brick, tiles, chimney pots and sanitary ware. 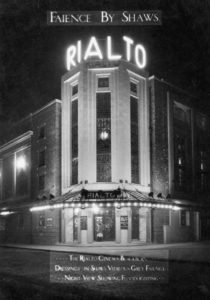 Before long, Darwen-produced fire clay products could be seen in town centres all over the country as Shaws Glazed Brick Co Ltd responded to the rise in popularity of faience, a glazed architectural terracotta used to clad buildings.  Shaws supplied faience for over thirty Odeon cinemas during the 1930s as well as many other iconic buildings, such as Battersea Power Station and the Hoover Building in London. Most recently Shaws supplied the tiles for Grayson Perry’s A House for Essex in 2015.

The production process was relatively quick and inexpensive. Terracotta blocks or tiles were cast from slip (liquid clay) using a mould and then finished with a glaze before firing. The result was a durable and low cost building material with the potential for elaborate and complex form.  Fireproof, resistant to environmental pollutants and easy to clean, architects recognised the benefit of these properties in the industrial towns of the UK. Moulds used to cast clay blocks or tiles could be reused several times making faience an economic option. The ability to mould intricate shapes gave architects artistic freedom, as did the different glazes available to give buildings colour and texture.

Production of both sanitary ware and structural ceramics involved casting complicated shapes that had to be strong, and developing glazes that were both impactful but also water and weather-proof. In order to gauge the quality of clays used in the slip casting process, Shaws produced test pieces using the same technique. Test pieces took the form of ornaments, bookends and vases, like the example featured here. Pieces were produced in a variety of experimental glazes. The vase on display is one of a number of examples of Shaws test pieces in the Blackburn collections.

Although Shaws stopped producing architectural terracotta in 2015, that skill and expertise has been retained by Darwen Terracotta and Faience, who continue to supply faience for new and restoration projects all over the country. Recent projects include the Natural History Museum, London, and Infinity Blue, a huge ceramic sculpture at the Eden Project.