THE MONOCHROME MUSEUM: Object No. 29 – A History of Belleek

Mr John Caldwell Bloomfield inherited the Bloomfield estate in County Fermanagh, Northern Ireland from his father. He was a keen mineralogist and after commissioning a geological survey of the area realised that it would be possible to make pottery from the raw materials found there. Other practical requirements also fell neatly into place – the factory was situated next to the fast flowing River Erne which was powerful enough to drive the machinery and Bloomfield was successful in campaigning to bring the new railway line to Belleek which would carry coal in to power the factory and take the finished products out to market.

Bloomfield had two partners in the business. Robert Williams Armstrong, originally from County Longford but working as an architect in London became the first manager and Art director of the pottery, and David McBirney of the firm David McBirney & Co who provided the finance, a drapery merchant from Arran Quay.
The foundation stone was laid on 18th November 1858 and soon the company began producing earthenware products.

Bloomfield was aware of the desperate need for work in the local community following the devastation of the potato famine and his new company brought some much needed employment into the local area by taking on apprentices and other workers. Bloomfield realised that they also needed talented craftsmen as well as labourers and so brought in 14 potters from Stoke on Trent, but it wasn’t until 1863 that the company succeeded in producing Parian ware. Belleek first displayed Porcelain at the Dublin Exposition of 1872, they had the largest display in the Irish and English industrial areas. The pieces they listed ranged from Parian china statues to ice buckets.
Despite this success they continued to work predominantly with earthen ware until 1920.

By 1865 the company was exporting pieces as far as America and Australia. They were an established name in England and Ireland, supplying Queen Victoria and other royals with their products.

Following the death of McBirney in 1882 and Armstrong in 1884 the property was acquired by a group of local investors and began trading as Belleek Pottery Works Company Ltd in 1884. The factory has changed hands a number of times since then and continues to operate today. 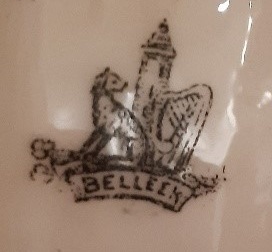 Our little piece of Belleek history is an ashtray designed in the style of a rowing boat upon a water and rock moulded base. It dates from Belleek’s first period which was 1863-1891. The mark on our piece is the traditional black harp, wolfhound and round tower sitting on an island of shamrocks with BELLEEK written below.