11 June 2020
By Gerry Wolstenholme; writer and student of Victorian literature.

Charles Dickens’ Farewell Reading Tour began on 6 October 1868 with a reading in London and 205 days later and with 70 readings under his belt, he arrived in Blackburn to read at the Exchange Assembly Rooms on 19 April 1869.

A large audience comprising the elite of Blackburn and its vicinity were there to listen to ‘his excellent delineations of character’. And he gave, as the Blackburn Standard reported, ‘one of his talented and interesting readings’. He read his Christmas Carol and Bob Sawyer’s Party and ‘The fashionable audience who patronised his readings, testified their admiration of his transcendent abilities as an author, an elocutionist and an accomplished mimic, by hearty plaudits again and again renewed.’ 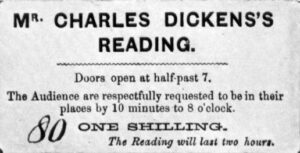 Ticket for a Charles Dickens reading.

From Blackburn he moved on to Bolton the following day where he spoke at the Temperance Hall. The Bolton Guardian’s critic reported that the reading was ‘the personification of humour’, adding, ‘Occasionally the amount of dramatic power exhibited was startling; the effect being considerably heightened by variations in the voice, according to the party supposed to be speaking.’

The Bolton Evening News meanwhile began its review by stating the reading was ‘extremely humorous’ following that with ‘and the assumptions of character by Mr Dickens proved how versatile are his powers, and what a fine intuitive appreciation he has of the histrionic art’.

His next venue, two days hence, was Preston, a town not a favourite of Dickens, so after the readings Dickens and his manager George Dolby left for Blackpool where Dolby said, ‘we had arranged to pass a quiet day’, staying at the Imperial Hotel. Dickens went for a walk on the beach and was seen by passers-by chasing after his hat that had blown off in the wind!

When he returned to the hotel, he wrote to his sister-in-law Georgina Hogarth, who ran the family home at Gad’s Hill, Kent, stating ‘I have had a delicious walk by the sea to-day.’ But all was not well for he was obliged to add, ‘I am much better than I was on Sunday, but shall want careful looking to, to get through the readings. My weakness and deadness are all on the left side, and if I don’t look at anything I try to touch with my left hand, I don’t know where it is.  I am in (secret) consultation with Frank Beard; he recognises, in the exact description I have given him, indisputable evidence of overwork, which he would wish to treat immediately.’ 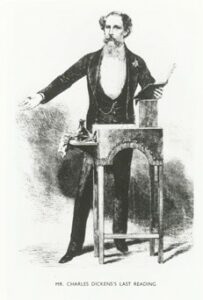 An image of Dickens at his reading table, originally featured in a review of the author’s last reading in The Illustrated London News.

As his condition worsened, his physician Frank Beard was sent for and his advice to Dolby was ‘If you insist on Dickens taking the platform tonight, I will not guarantee but that he goes through life dragging a foot after him.’ With tears in his eyes, Dickens’ retort was ‘Let me try it tonight. It will save so much trouble.’ But in the end discretion was the better part of valour and the Preston reading was cancelled and Dickens returned to London.

Dickens finally finished his interrupted Farewell Reading Tour with 12 readings at St James’s Hall, London, between 11 January and 15 March 1870. And after that final reading he ended with a tearful ‘From these garish lights I vanish now for evermore, with a heartfelt, grateful, respectful, and affectionate farewell.’