150 years after his death, Charles Dickens remains one of the world’s most well-known and widely-read authors. His works continue to be printed in enormous numbers, in dozens of languages, and he remains the focus of academic study and lay enthusiasm alike. His works have been through countless editions, and inspired a dizzying number of spin-offs, imitations and adaptations. His characters and creations have been re-used and exploited across a great breadth of genres, leaving an incredibly rich (and still growing) legacy of Dickens-related material. 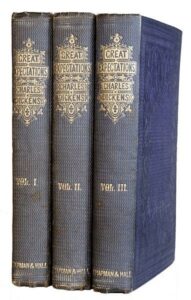 The seemingly limitless scope of Dickensiana is a veritable goldmine for the Dickens enthusiast, and means that ‘collecting Dickens’ can take on many guises. There are countless avenues for the intrepid collector to explore, accommodating a huge range of tastes and budgets.
An obvious place to start is with the works themselves. Dickens produced 15 major novels in his lifetime (including the incomplete Edwin Drood), and dozens of shorter stories, sketches and essays. Owning early editions of the works is an attractive prospect for any collector.
The holy grail for many is ‘Original Cloth’, i.e. first editions of the works in the original cloth binding in which they were first sold. In fine condition, these are some of the rarest and accordingly most expensive editions, and obtaining copies can be a lifetime’s occupation. Some titles are more sought after than others, and depending on condition and scarcity, can come with high price-tags. A decent example of a common title might be obtainable for under £200, while a fine first edition of Great Expectations, published in three volumes in 1861, and one of the most difficult of Dickens’s titles, might command as much as £75,000! 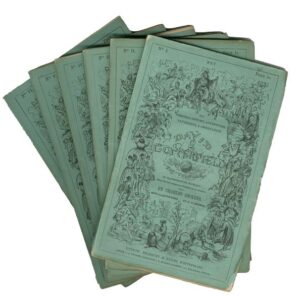 But if that is a little beyond your budget, there are plenty of other options. First editions are most commonly found in contemporary leather bindings, which are generally more affordable than those in cloth. These can often be highly attractive volumes, and make worthy foundations for any collection. Later editions, especially those printed after Dickens’s lifetime, are more affordable still, but are no less ‘collectable’, and often bring their own particular charm.

Other collectors might prefer to focus on Dickens in parts, and look for examples of his works in their original monthly instalments, as they first appeared to the public. Most of the major novels were published this way, in pictorial blue or green wrappers, issued with plates and numerous commercial advertisements. By their very nature they are fragile, and often suffer through having been passed through the many hands that read them. Prices vary, but nice clean examples, retaining all the advertisements, are difficult to find under £1500, while the less common titles make five times that. 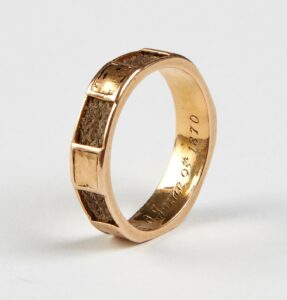 But why stop at the works when there is such magnificent scope for collecting beyond the novels? Related and ephemeral material include minor works and contributions to periodicals, biography and criticism, artwork, portraits, postcards, cigarette cards, playbills, advertisements, theatrical adaptations, parodies, pirated editions, overseas editions, pamphlets, memorial souvenirs, and, for the higher budgets, inscribed copies, autograph letters, books from Dickens’s own library, or even objects from his household.
In short, there are countless ways in which the Dickens admirer can recognise his contribution to literature, and there is niche for every collector. Dickens, ever the canny businessman, would no doubt be gratified to know that 150 years after his death, the ‘industry’ that he worked so tirelessly to build around himself is thriving.