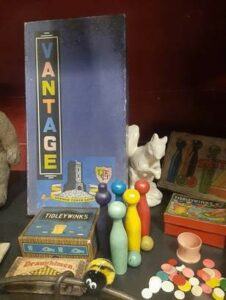 View of one of our display cases. A tiddly winks set can be seen in the foreground with two more boxed sets behind. (If anyone has information on the Darwen Tower Games box in the background, we would love to hear from you)

As a child I loved to play games with family and friends, perhaps you did/do too, and as we have several games on display in our Skill & Labour Gallery I decided to write a short series of blog posts exploring the history of some of the games we have in our collection.

Okay, it is time for me to confess, I am a huge fan of this game, and it is one of life’s simple pleasures. However, I am concerned… as the Museum’s Education Officer I have been conducting ‘Toys’ sessions for schools for c.14 years and in all that time I can count on my fingers the number of children able to identify the Tiddlywinks set that we have on display in the Skill & Labour Gallery.

I looked into the origins of Tiddlywinks and expected it to be a game with an ancient ancestry, along with Snakes & Ladders and Nine Men’s Morris but not so; it is actually a relatively modern game, dating back to the end of the nineteenth century.

The game’s inventor was Joseph Assheton Fincher.  Born in England in 1863, Joseph was a Bank Clerk who patented his idea for the game in 1888.  The following year he applied for the trademark Tiddledy-winks.

The game was originally marketed as a parlour game for adults but it rapidly caught on and by the 1890s it was hugely popular and played by adults and children alike.  Inevitably, it soon had many imitators, keen to cash in on the craze.  Soon, versions of the game began to appear based on other popular games, such as golf and tennis.

As with all crazes, its popularity waned and in the twentieth century, the game became more of a children’s game.  It never really caught on beyond the UK and the USA; however, in the middle of the twentieth century the game got a new lease of life when Oxford and Cambridge University students began to play the game competitively and today there are the English and North American Tiddlywinks Associations.  Sadly, the Scottish Tiddlywinks Association has disbanded.

Played with a small pot into which the players had to flick their small discs (known as Winks).  It can be set up in no time at all, played by multiple players and a game might last (depending on the skill of the players) up to half an hour.

In all, a very simple and fun game to be enjoyed by all ages; so get out there and start tiddling your winks…