Guest Blog: A Painting as a War Memorial? by Dr Kate Nichols, University of Birmingham 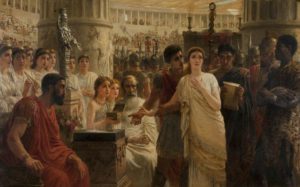 Dr Kate Nichols is an academic working in the Department of Art History, Curating and Visual Studies at the University of Birmingham. In July 2016 she presented her research on Diana or Christ?, a large oil painting which has hung in Blackburn Museum and Art Gallery since 1919. The following are Kate’s own words.

Diana or Christ? was painted in 1881 by the Victorian artist Edwin Long. It’s one of the best known images in Blackburn Museum and Art Gallery, but one aspect of its local history is often overlooked: it was given to the town in April 1919 as a memorial to the First World War. An inscription on the frame describes it as:

A tribute of admiration to all those of Blackburn who went forth to battle for their King and Country’s cause and who by their self-sacrifice and gallantry helped to achieve a glowing victory in the Great War, 1914-1918.

In December, I came back to Blackburn to undertake some research in the museum’s archives. Rummaging through old letters and newspaper articles, I found something quite unexpected: several leaflets, beautifully and carefully printed on different coloured sugar paper, which seem to have been handed out to viewers when this painting first went on show in April 1919. These leaflets are remarkable: they give us an insight into how people were encouraged to interpret the war through looking at art works.

The leaflet states that ‘this picture has been presented to keep in memory the noble Choice of the Right.’ So where the young Christian woman in the painting is sacrificing herself for the future of Christianity, the men of Blackburn who went off to fight had similarly sacrificed themselves. The painting now becomes not about doubt and faith, as it had been to many Victorian viewers, but about making the right choice, about triumphalist Christian certitude. The leaflet reaches back through time, to take a nineteenth-century re-imagining of the third century CE and claim it as a means of understanding – and justifying – the bloodshed of the First World War. It concludes:

It lays claim to continuity with the past, and also to the future in its reference to children. Unlike the war memorial in Corporation Park, it doesn’t focus on mourning and loss, but on might and right.

Yet going to war wasn’t a choice for many people. Conscription was introduced in March 1916, legally obliging men aged 18-41 to serve. There was, however, one choice that could be made: conscientious objection. In November 1919, some seven months after Diana or Christ? went on display, a Mr J. R. Hudson delivered a well-attended lecture at Overlooker’s Hall, hosted by the Independent Labour Party. Hudson was a local conscientious objector, who had been imprisoned during the war. He described the painting as representing the ability to make decisions that go against popular opinion. According to a report in the Blackburn Times, Hudson argued that:

There must be something wrong with the tone and temper of the people … who could choose this picture as a memento of the Great War when it suggested to a conscientious objector something quite the reverse of war.

This entirely turned on its head the claims of the leaflet handed out in the gallery. The painting had new found serious, civic meanings for the people of Blackburn, who visited in droves: 17, 500 visitors are recorded in April 1919, 3 times the number in the previous month. But even with the inscription on the frame, there was no one decisive view point on its meaning as a memorial.