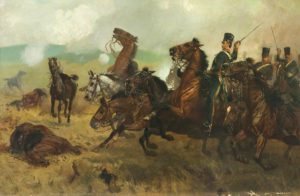 The Charge of the Light Brigade, In as Many Words

This large and beautiful piece of fine art was purchased for a staggering £300 in 1894 by Blackburn museum. The painting was completed in 1889 by John Charlton, an incredibly talented painter of horses and hounds. However, after his role in the Egyptian campaign of 1882 his interests turned to battle scenes. This painting, which weighs in at an impressive 102×62 inches, is hung in the foyer of Blackburn museum and is an impressive spectacle.

To John Charlton, the artist, animals were always the central focus of his work, spending most of his life painting horses and hounds. In 1889 paintings of galloping horses were highly desired in the art world as the invention of photography had clarified that horses did not run in a rocking horse position. The detail of the animals is exceptional in this painting with the straps, buckles, chains and regimental badges being thoroughly intricate and faithful to reality. The painting is direct and sharp, it personifies the essence of a suicidal charge, highlighting elements of both heroism and of sacrifice.

This famous event took place in the Crimean war which was a conflict in the mid nineteenth century lasting from 1853-1856. The charge of the Light Brigade which occurred at the battle of Balaclava (1854) is considered one of the most heroic scenes in military history. A decisive but fatal ride to death or glory, in the case of the Light Brigade they received both. Their objective was to seize cannons from a retreating Russian artillery unit, however they met a much more formidable opponent than they were expecting. The battlefield was a cavalryman’s worst nightmare, with cannon batteries to the left, right and in front of them. The slaughter was inevitable.

Minutes before the charge there was a famous case of miscommunication, in an almost Chinese whisper-like fashion the orders were changed, misheard and misgiven. This breakdown in communication lead to one of the most heroic mishaps in military history. The generals of the allied forces watched in disbelief as the events unravelled, watching what they would only be able to describe as a beautifully heroic slaughter. In the moments leading up to the charge Lord Cardigan famously questioned the sanity of the order to which the reply was ‘What choice do we have?’. This is featured in Lord Alfred Tennyson’s poem The Charge of the Light Brigade, in which is written ‘theirs not to make reply, theirs not to reason why, theirs but to do and die’. These few lines perfectly sum up the heroism of the Light Brigade, in that they knew they were almost certainly riding to their deaths but also that it was not their place to question orders.

The picture depicts the second line of the charge. He paints Lord George Paget leading the 4th dragoons, and the second line of the Light Brigade meeting the riderless horses of the first line of the charge as their riders have been killed or dismounted moments before. This is an interesting scene to portray as the artist is clearly demonstrating the sombre side of the tale not just the heroic side as the riderless horses represent the casualties sustained. The Light Brigade was successful in charging the guns and dealing with the infantry and artillery, however soon after, a Russian general arrived with 2,000 cavalrymen. Unsurprisingly, and in classic ‘Light Brigade fashion’, Cardigan’s men charged the superior force and were unfortunately but inevitably overwhelmed and routed.

Of the 670 soldiers of the Light Brigade only 195 remained mounted after the battle. For years this infamous slaughter has captured the imagination of the arts, the romanticised warriors forever immortalised through the bravery of their peers and the stupidity of their generals. ‘The noble 600’ as Lord Alfred Tennyson refers to them as and ‘The valley of death’ was their field of battle and for many of them their grave.

673 brave cavalrymen rode in the Light Brigade, this blog is done in as many words.