Guest Blog: The Ancient Greeks in Pakistan by Max Hamilton

My name is Max Hamilton a History student at the University of Manchester and I have been giving my time to Blackburn Museum and Art Gallery in August 2016. Here is a blog I have written which reveals more about one of the objects in the collections that is hidden away in the stores.

In 1874 C.L.Hornby, from the famous Hornby family of Blackburn, donated two very curious statues to our museum. The statues appear to be off-cuts of a Greek temple frieze, however, they were in fact found and purchased in Northern Pakistan. Which opens many questions as to their origin. The statues were bought in the town of Hoti Mardan situated in northern Pakistan, which was the very fringe of Alexander the great’s eastern empire. The location is particularly interesting as it is geographically surrounded with historical possibilities of where these statues may have come from. 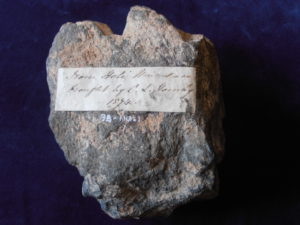 The original label from 1874 when this item was brought to the museum.

Statue A is in itself interesting as it mixes both Hellenic and Asiatic sculpture styles into one composition. The sculpture appears to depict strength and submission, the Greek characters stand tall and dominant over the much smaller Asian styled characters. This kind of masonry propaganda is typical of the Greeks who favored carving their victories into temples. The feel of dominance to this composition could therefore represent a recent victory over the Persians or an Asian tribe, possibly the battle of Hydaspes. Meaning that the possibility that these statues originated from Bucephala or Alexandria at Nicaea is strong, giving them incredible historic value.

Statue B, which shows a man who is either seated or cowering from something off-shot, opens many possibilities of what the composition is. The aforementioned Apollonius wrote of a temple, not too far from Hoti, on which was carved statues of large eagles. The background pattern of the frieze shows curved lines and feather like shaped which could be the wings of a large eagle. So it is possible that this frieze exert is from the temple that Apollonius wrote about in the 1st century A.D. Furthermore, this sculpture could be of Heracles or Prometheus in the myth in which Heracles kills the eagle which eats Prometheus’ liver on a daily basis. This myth can been seen on vases and it is therefore possible that the composition is shown on this temple. 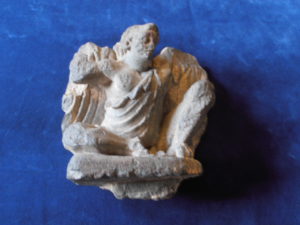 During the short but fruitful reign of Alexander the Great Greek culture spread throughout Asia and north eastern Africa. This included Greek art, theater, architecture and way of life. This process became known as ‘Hellenisation’, the process of spreading Hellenistic culture which survived long after the death of Alexander in 323 Bc. Alexander lived to only 32 but through statues like these we can see his legacy lived on in his kingdom.

So here are a couple of statues with many questions and possibilities of origin surrounding them, they could be unique objects which capture the essence of Alexander’s last great victory or could represent Greece’s favourite mythical hero. However, what remains a fact is that these are two artifacts which came from the very periphery of one of the most impressively assembled empires the earth has ever seen and in that alone, they hold incredible historic value. Having just enrolled on a second year course at university studying the legacy of Alexander the Great, I never thought I would be able to literally touch part of it.