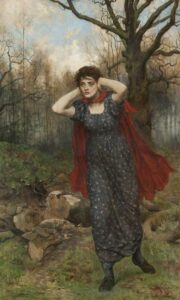 As part of our Pre-Raphaelite week, we are taking a closer look at ‘Hetty Sorrel’ by John Collier, a painting recently featured in a question set by Blackburn Museum for The Guardian’s Great British Art Quiz (warning – clues coming up!)

At first glance, this painting is deceptively simple. A young, rosy cheeked Hetty Sorrel urgently makes her way through a forest in a pretty floral dress and scarlet cloak which billows behind her. But look closer at Hetty’s eerie and chilling stare. With her hurried posture and hands covering her ears, you might wonder what she is running from. The answer lies in the narrative of the novel ‘Adam Bede’ (1859).

‘Adam Bede’ is set in the village of Hayslope, where the author follows four key characters to explore the social and moral issues troubling Victorian society such as vanity, shame, murder, jealousy and the role of religion. The character of Hetty Sorrel has a simple life as a milkmaid but desperately craves for a life as a lady with all its finery and attention. Her charms eventually capture the attention of the wealthy Captain Arthur Donnithorne, a young but dithering squire who seduces her.

In contrast, Adam Bede, is a humble local carpenter, much admired for his integrity and intelligence and secretly in love with Hetty. When Adam discovers her intimate relationship with Arthur, the two men fight and Arthur promises to leave Hayslope. Adam offers to marry her but before the wedding she discovers she is pregnant with Arthur’s child. She leaves the Hayslope in search of him but learns his regiment had left for Ireland. Unable to find him or return to the village, a desperate Hetty makes her way to her cousin Dinah, but the baby is born before she can reach her. Hetty abandons the baby in the woods, despite its cries. Guilt-ridden, she returns to the woods but discovers it dead. When she is arrested for infanticide, she is sentenced to death by hanging but ultimately saved from this fate by Arthur, who has the sentence reduced to transportation.

In the painting ‘Hetty Sorrel’, we see Collier’s depiction of a desperate Hetty, running away from the cries of her abandoned infant.

Although to modern eyes, Hetty’s dilemma can seem avoidable and her actions extreme, at the time the novel was written, women who had children outside of marriage had few options. Many handed their babies to Foundling Hospitals or in desperation abandoned them for fear of social disgrace. The author, a woman named Mary Ann Evans, had abundant real life stories to draw from, and Hetty’s plight was believed to be based on a real story.

Evans printed under a man’s name to ensure her books were taken seriously in a male dominated society. So which author was Mary Ann Evans better known as? We’re not telling – that really would give it away, but if you want to try your hand at our Hetty Sorrel question or any of the other questions set by Blackburn Museum you can do so here. Good luck!