Remarkable Account of a Horrid Murder Discovered! And another prevented, by A Dog! 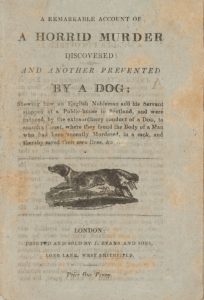 Remarkable Account of a Horrid Murder Discovered! And another prevented, by A Dog! (London: printed and sold by J. Evans, c. 1820). Loaned by the Harris Museum, Art Gallery and Library. Image © Harris Library, Preston.

This exciting tale of a brave and clever dog discovering a murder, and preventing the murder of his own master, is an early example of a new type of cheap fiction emerging during the print revolution of the nineteenth century. Published by J. Evan in London in 1825, this chapbook was aimed at younger and or/newly or semi-literate adults of the working or lower middle classes. Reports of sensational crimes, their discovery and prosecution were popular from early on in cheap ‘faction’.

This particular tale is also found in a contemporary publication called the Terrific Register; or Record of Crimes, Judgments, Providences and Calamities printed in High Holborn by T. Richardson in 1825. In this version of the story, a traveller from Manchester on his way to Scotland finds that the old woman who runs the inn where he stops for the night is reluctant to let him take his dog, a great Dane, up to his room. When the dog enters the room, he growls at something under the bed, which is discovered to be a man hiding with a knife in his hand whose intention is to murder and rob the traveller. The traveller pulls a gun, the criminal is apprehended and arrested the next day. The traveller’s life has been spared by ‘the wonderful sagacity of his faithful dog’.

While earlier chapbooks featured nursery rhymes, songs, prophecies, adventures and news, more lurid content, aimed at older newly or semi-literate readers began to gain traction in the 1830s. While our example from the Spencer collection is identified as a chapbook with very limited content and an emphasis on illustration, ‘Penny bloods’ were published as weekly episodes featuring a single black and white illustration at the beginning and double columned densely printed text, usually of 8 double-sided pages. According to Judith Flanders, by 1850 there were ‘up to 100 publishers of penny-fiction’. True crime fiction took off in popularity in the 1850s, and in many ways, it is still with us, along with its Victorian successor, the detective novel.

Spencer has over 300 chapbooks in his collection, but he did not collect penny bloods or ‘dreadfuls’.