The Life and Prophecies of Mother Shipton 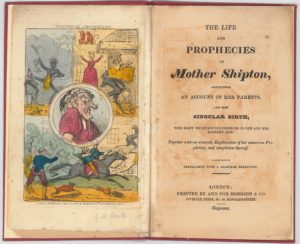 Books of prophecies were popular subjects for chapbooks, and Spencer’s collection contains several examples of the genre. The Preston Miracle, being a very strange and wonderful relation of one Hezekiah Armstrong, Prophecies of Thomas the Rhymer, and The Life and Prophecies of Robert Nixon demonstrate the selling power of prophetic visions.

Mother Shipton, known also as Ursula Southeil, was a reputedly born near Knaresborough, Yorkshire in the fifteenth century. Her legend, which includes her illegitimate birth and perhaps supernatural paternity, her hideous facial features and her ability to foresee the future, are probably a combination of merged oral traditions of the late medieval period in the north of England. Mother Shipton and her prophecies were not found in printed form before the seventeenth century, but the prophecies of Thomas Rhymer, and those of Robert Nixon, seem to stem from late medieval manuscript sources associated with real individuals. Like Sir Orpheus, Thomas the Rhymer is carried off by the Queen of Elfland who shows him 3 different roads: the road to heaven, the road to hell and the road to her own kingdom. Thomas Rhymer choses to return to his life but retains the gift of prophetic vision. His story survives in at least 5 medieval romances. Robert Nixon’s name is linked to a range of individuals who may have lived in the fifteenth or sixteenth centuries. The most famous prophecy associated with Robert Nixon is the outcome of the battle of Bosworth Field: ‘When a raven shall build in a stone lion’s mouth/ On a church top beside the grey forest: Then shall a King of England be drove from his crown’. 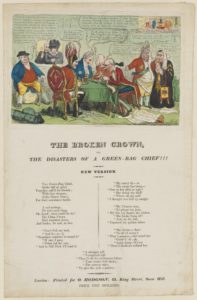 Mother Shipton was printed in London by Hodgson & Co., Juvenile Press, at No 10, Newgate Street on 22nd July 1823. The frontispiece, which shows Mother Shipton and some of her prophecies, was a coloured engraving by Robert Cruikshank, one of the most famous engravers of his day. The chapbook sold for sixpence; rather more expensive than the examples we have looked at previously produced by Rushers of Banbury and Knight and Bagster of London who sold their chapbooks for a penny. Mother Shipton has much more text; the sole illustration is the frontispiece. It is intended for the adult as opposed to the child reader who has more than pocket money to spend on this scintillating read. 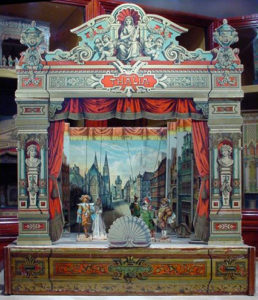 William Hodgson was a well-known and successful publisher who, like many late eighteenth and early nineteenth-century publisher/printers, sold a wide variety of material. William Hodgson, and his son Orlando, who took over the business when the elder Hodgson retired in 1823, sold not only satirical political prints, like the ‘Broken Crown’ shown here, which were sold as separate sheets, but also the enchanting ‘Hodgson’s Juvenile Drama’. These were miniature toy paper theatres created with rich, exact detail, which were sold along with accompanying scripts and miniature paper actors to be cut out and used for re-enactment of the plays. Orlando Hodgson was the inventor of these remarkable paper toys which seemed to appeal to adults as much as children. ‘Souvenir’ sheets from theatrical productions which featured favourite actors in various roles were already a popular product in the late eighteenth century, but Orlando expanded the market and preserved for us remarkable representations of costumes, props and scenery from the lively theatre scene of the time.