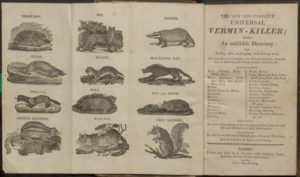 Although this 1802 publication is classed as a chapbook by Spencer in his collection, it is certainly longer than most of the other examples in this category. The Universal Vermin Killer is 66 pages in length and contains a fold out black and white illustration of twelve of the animals featured in this book of instruction. The book also has a credited author, Arthur Hogg, another feature which makes this publication less than a perfect fit for the usually anonymised genre of the chapbook.

The publishers, J. Bailey, (and later J. and H. W. Bailey of various addresses on Chancery Lane between 1799 and 1828)[1] seem to have had some success with this how-to book format. Spencer also collected The Complete Art Of Angling (67 pp.), The Young Sportsman’s Pocket Companion- rules for stalking every species of land animal by Walter Goodall (67 pp), The School of Arts or Fountain of Knowledge (72 pp) and The Whole Art of Legerdemain or Hocus Pocus in Perfection by Henry Dean (28 pp), all published by J. Bailey c. 1810. These titles had been published elsewhere previously by different publishers. The last in the list, The Whole Art of Legerdemain, has been reduced by J. Bailey et al into 28 pp.; closer to chapbook format than any of the others. 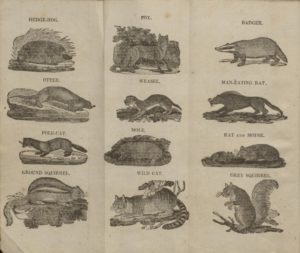 First published in London in 1722, this book is reputedly the first book on magic published in the United States, (by Mathew Carey in Philadelphia in 1795; the 11th edition of the book). In its full format it features 104 slights of hand including: ‘How to pass the Balls through the Cups’, ‘How To seem to eat knives and forks’, ‘How to knit a knot upon a handkerchief, and to undo the same with words’ and ‘How to show the Hen and Egg-bag, and out of an empty bag to bring out above an hundred eggs and afterwards to bring out a living Hen’. Bailey sold these books for a shilling, considerably more than the standard chapbook price of one penny (12 pennies per shilling before 15/02/71), indicating an adult market. 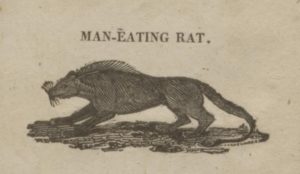 The Universal Vermin Killer opens with a double fold out page featuring detailed, if not entirely accurate, wood cuts of various animals. Many of these creatures we would certainly not consider vermin today. In fact, many of these animals are endangered and cherished by us, particularly the hedge-hog and the otter. Some of the identifications of the animals are inaccurate: the pole cat resembles a weasel, and the weasel a stoat, the ground squirrel looks like an American chipmunk, while the man-eating rat seems to come from the realms of fantasy and the wild cat brings to mind Lewis Carroll’s Cheshire variety. The foldout seems to be another example of wood cuts making do as needed by the publisher. It is interesting that even in the context of this book, intended to be a user-friendly manual, that the preface includes an apology of sorts for the destruction of God’s creatures. It is argued that the ‘finger of God is evident even in the most noxious parts of his creation, and they are all doubtless produced for divine purposes, the most apparent of which, is to humble the pride of man’. Man has uniquely been endowed with ‘reason for his ease and protection’. It concludes that this is a ‘family book’ designed to fulfil just this purpose. The children of the family may not have been so grateful for the acquisition of this volume, particularly for the cure for headlice:

“Boil fresh butter mixed with pepper for a salve; then cut off the hair, anoint the head, and cover with a nightcap”