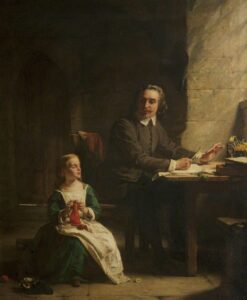 Born in Edinburgh, Alexander Johnston studied at the Trustees Academy from 1831 – 1834 before moving to London, where he studied at the Royal Academy.  He later showed his paintings there on a regular basis, as well as at the British Institute and the Society of British Artists at Suffolk Street.  Originally specialising in portraiture he later became interested in subject painting. Johnston tended to paint rather austere painting, grave in sentiment and dwelling on the pathos of life.

John Bunyan, the subject of the picture, lived from 1628 – 1688.  In 1653 Bunyan was received into the Baptist Church and became a deacon in 1655, after which he started preaching.  He fought vigorously against Quakerism and was soon indicted for preaching without a license.  In 1660 he was imprisoned in Bedford Jail, where he served several custodial sentences for the same ‘crime’ until 1675, when the authorities freed him, seeing him no longer a threat.  During his time in jail, he wrote “Grace Abounding”, which describes the intensity of his religious conversion and his affection for his daughter, Elisabeth, who also appears in the picture.  When he was jailed for the second time, he wrote the first part of “Pilgrim’s Progress”.

Bunyan is said to have made long-tagged laces to raise money for his family while in prison, which seems to be the occupation of the blind girl in the picture.  On his final release, Bunyan was a pastor for sixteen years until his death in 1688.

“He was tall of stature, strong-boned though not corpulent, somewhat of a ruddy face with sparkling eyes, wearing his hair on his upper lip after the old British fashion: his hair reddish, but in his latter day, sprinkled with grey: his nose well set, but not declining or bending, and his mouth moderately large, his forehead something high, and his habit always plain and modest.”