The Great Wave off Kanagawa. Mount Fuji can be seen far off in the background while fishermen struggle in their boats against crashing waves that threaten to engulf them.

May 2020
By Anthea Purkis, Curator of Art, Blackburn Museum and Art Gallery

Katsushika Hokusai was born in Edo (modern day Tokyo) in 1760. His early work focused on the traditional ukiyo-e subjects of courtesans and Kabuki actors but he is best known for his series, Thirty Six Views of Mount Fuji, which capture the wonder of this iconic mountain from many different locations, across the four seasons & in a variety of weather conditions. When the series was published in 1831 he gained worldwide recognition and influenced Art Nouveau artists such as Monet, Degas and Renoir. Hokusai did not think of himself as an accomplished artist, he believed that he only began to ‘grasp the structures of birds & beasts, insects & fish’ at the age of 73 and that only if he lived to be 110 years old would ‘each dot and each line possess a life of its own’.

It was common practice for Japanese artists to change their name following a change in style or circumstance. Hokusai took this practice to new heights – he adopted 30 pseudonyms during his lifetime. His birth name was Tokitaro and his first pseudonym, Shunro, was given to him by his teacher. It wasn’t until 1800 that he took the name Katsushika Hokusai. At the time he created the Thirty-six Views of Mount Fuji series he was known by the name of Iitsu.
He was also well known for his lack of cleanliness. It is said that he felt that cleaning was distasteful so he allowed dirt and mess to build up in his home then simply moved on when it became too much. He moved house more than 90 times!

Red Fuji or Fine Wind, Clear Morning. One of 36 Views of Mount Fuji series dates from c.1830-32. In summer and early autumn when the wind is southerly and the sky is clear Mount Fuji red can be turned red by the rising and setting sun. The forest at the foot of the mountain is still in dark shade and snow can still be seen at the peak.

Throughout his life Hokusai mentored at least 50 students and is believed to have produced around 30,000 works, many of which were destroyed in a fire in 1839. He continued painting until the very end of his life and it is said that his dying wish was for Heaven to grant him 5 or 10 more years in order to become a real painter. He died on 10 May 1849 aged 88.

Hokusai began the Thirty-Six Views of Mount Fuji because he found himself in financial trouble. By this time in his life he was in his late 60s, had survived being struck by lightning, a fire in his home and a stroke, had lost 2 wives, and needed to help his grandson to pay off some debts.
Mount Fuji dominates the Japanese landscape and is held as a sacred place for Japanese people. The 36 views depict the power and majesty of nature against the might and majesty of Mount Fuji. There are actually 46 views in the series because an extra 10 were added after the original 36 had been published.
We are lucky enough at Blackburn Museum and Art Gallery to have an amazing collection of Hokusai prints – here are a few of them.

Fujimigahara (Fuji-View Fields). A view of Mount Fuji across Fujimigahara. Mount Fuji is framed by a large barrel while a cooper is busy working inside it. His tools and other materials can be seen on the ground. 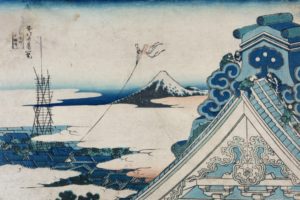 Hongnaji Temple at Asakusa in Edo. View of Mount Fuji with the temple rooftop in the foreground. It is New Years Day, a kite is flying and workers are replacing tiles on the temple roof. 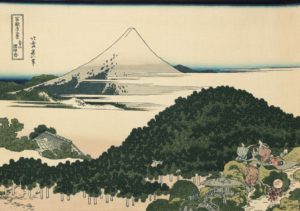 The Cushion Pine at Aoyama, Edo. This print shows the famous pine tree in the garden of Ryuganji, the enormous spreading boughs are propped with wooden supports. There are people enjoying a picnic on the right and if you look closely you can see the legs of a gardener trimming the tree on the left. 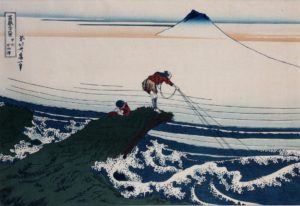 Fuji from Kajikazawa. A fisherman can be seen casting his net into the rough waters off Kajikazawa as the waves crash onto the rocks. Mount Fuji can be seen rising from the mist creating a triangle with the rocks and fishing lines. 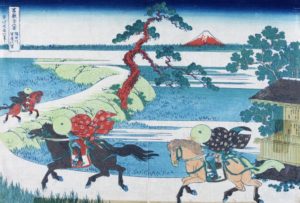 Sekiya Village on the Sumida River. Three horse riders racing along a winding road with their robes billowing out behind them. Mount Fuji can be seen red in the distance with a snow capped peak.