‘Spot the Birdy 2 – The Skua’ by Stephen Irwin 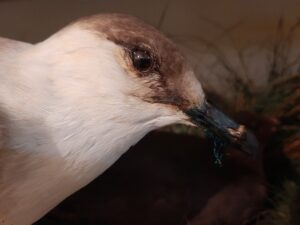 I like seabirds, I am a big fan of gulls; I love their raucous cries and bold, bad behaviour. As well as these traits, there is no denying they are superb fliers, their flight is seemingly effortless as they wheel and bank over the waves.

However, my encounter with a pair of skuas on a remote island in the Shetlands was rather more alarming but even then, as I fled (along with a shrieking Italian chap), I couldn’t help but admire their aerial prowess.

There are seven species of Skua and they are all predatory seabirds. They are strong, acrobatic fliers and great travellers. If you think that gulls can be aggressive, skuas definitely ‘turn it up to eleven’, I can vouch for that but more later.

Around Great Britain, the two species you are most likely to see are the Great Skua (or Bonxie) and the slightly smaller Artic Skua.  At first glance both species could be mistaken for a brown seagull and while you might see them off the coast anywhere in the UK, your best chance to see them is on the Orkney or Shetland islands.

In the 1980s I visited both Orkney and Shetland and took the time to have a look around their ancient monuments; I was especially taken with the Brochs – circular drystone towers dating back to roman times.  The finest of these is on the Island of Mousa in the Shetland isles. When I visited, I took the bus to Sandwick and from there sailed across to Mousa in a small, open ferry in the company of an Italian chap I had met on the bus.

Once on the island it is a short walk to the broch but I paused on the rocky shore to listen for the cheeping of Storm Petrel chicks in their nests amongst the boulders at the top of the beach.

After exploring the broch we set off to amble around the small island, seals hauled up on the sand, fulmar chicks threatening to projectile vomit on the unwary were among the sites to be seen.

As we wandered, I saw a Great Skua nest and the adult floating up into the air to keep an eye on us, I motioned my companion to change direction but in doing so, we wandered unknowingly into the territory of a pair of Artic Skuas. Moments later, I heard a shriek and turned to see my companion duck and flail his arms in the air. A split second later, I saw the other Skua coming for me.  I have a memory of a dark bird with straight outstretched wing and black eyes flying straight at my face.  I turned and ran but even at the time, I had to admire the way in which those two birds flew figures of eight around us, wheeling to dive on us from behind in order to drive us away from the nest. 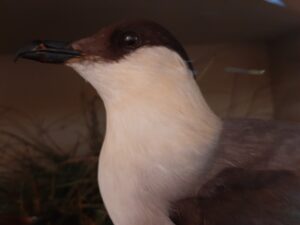 If you want to have a calmer encounter with an Artic Skua, I suggest you pop into the museum and have a look at the birds on display near the front desk.  Our two Artic Skuas are labelled using their old-fashioned names – Buffon’s and Richardson’s Skuas.

Sadly, there is serious concern over the decline I numbers of these tremendous sky pirates and the Artic Skua is on the Red List.  I can only hope that their numbers recover.