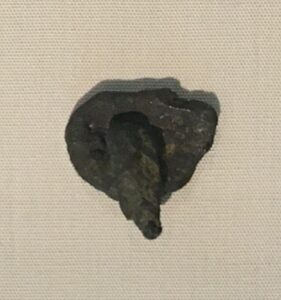 On 20th March 2020 this unexceptional looking piece of scrap metal was put forward by Blackburn Museum for the Yorkshire Museums #CuratorBattle Twitter campaign as #DullestObject. On the face of it, it meets the criteria perfectly. It’s small, squashed and featureless; unremarkable and unmemorable. If its uninspiring appearance isn’t enough to make it a suitable candidate, the object itself is also a 20th century replica. The original is another equally, small, squashed and featureless piece of metal held by the British Museum.

The story behind is perhaps slightly more interesting. Our #DullestObject is an exact replica of a stud shaped piece of scrap lead dating to the Late Bronze Age (about 1300-800 BC), the original of which was found near Portfield Farm, Whalley Lancashire. It forms part of what collectively became known as the Portfield Hoard. 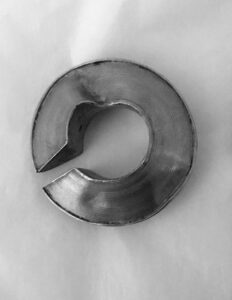 Replica of a gold ‘lock’ or ‘tress’ ring from the Portfield Hoard. Although their purpose remains unknown, a penannular (incomplete circle) shape suggests that they may have served as earrings or decorative hair pieces, hence the name ‘lock’ or ‘tress’.

The Portfield Hoard was found at the site of an Iron Age hill-fort, approximately half a mile from Whalley, Lancashire. The artefacts were discovered in the summer of 1966 when pipe-laying operations were being carried out by Manchester Corporation Waterworks [1]. The hoard comprised artefacts and fragments dating from the late Bronze Age: a gold penannular bracelet, a gold ‘tress’ or ‘lock’ ring, two bronze socketed axes, a bronze blade fragment, two bronze knife fragments, a bronze gouge and a ‘small fragment of rough metal, clearly a by-product of smelting’ [2] (the ‘stud’).

There are many reasons why objects might be collected and kept together in this way only to be either lost, purposely discarded or remain otherwise unrecovered. In this case, many of the items in the hoard were broken or damaged. This, along with the presence of scrap metal (the ‘stud’), led archaeologists at the time to believe that the objects may have been put aside thousands of years ago by a bronze-smith for recycling [3]. 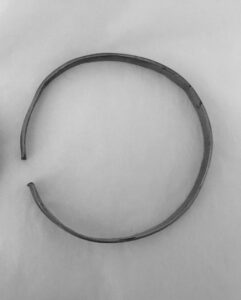 Replica of a bracelet from the Portfield hoard. The original bracelet was cast in gold in a penannular shape.

In 1967 the gold finds were declared as Treasure by the coroner and acquired by the British Museum. In a bid to keep the hoard together, the landowner also agreed to give the other items to the British Museum on the condition that they produced exact replicas to present to Blackburn Museum. The result was amazing. Every dint, break, imperfection and variation in patina was exactly replicated for the Blackburn Museum set.