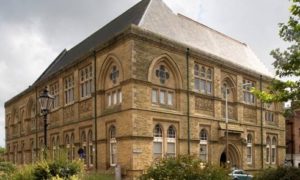 If you look at the exterior of the Museum and Art Gallery, you will notice seven stone-sculpted panels, three above the entrance on Museum Street and four on the Richmond Terrace side. These panels are 10 feet wide by 4 feet high and were sculpted by CW Seale from London. The cost of each panel was covered differently but important local men paid for most.

The three panels on Museum Street were in place when the Free Library and Museum opened in June 1874 and the ones on Richmond Terrace completed by the 1890’s.The panels represent the industries, which made Blackburn rich, and the subjects, which could be found inside the museum and library, such as art and literature. Together they represent Blackburn’s motto, Arte et Labore, skill and labour.

The three panels above the entrance, from left to right represent Art, Literature and Science.

Literature Sculpted Panel – the only panel included in the original contract.

The Literature panel has figures of some of the most famous names in literature, Moses, Homer, Plato, Chaucer, Shakespeare, Milton, Francis Bacon, Newton and Sir Walter Scott.

The figures in the Science panel do not represent any famous scientists but rather their professions. A miner, engineer, surveyor, chemist, astronomer, geographer, navigator and mechanic.

Looking up at the exterior from Richmond Terrace the four panels from left to right are; Agriculture, Iron Foundry, Cotton and Commerce.

The Agriculture, Iron Founding, Cotton and Commerce panels as with the Science panel have figures and tools representing each profession within the industries.

Of the four, the most fascinating panel and the one which best illustrates Blackburn’s history is the Cotton panel. It shows an Indian man inspecting Blackburn’s cotton before he places an order to import it to India. It is important to remember that the cotton industry made Blackburn a prosperous town during the Industrial Revolution.

The panel reminds us of how ‘Cotton was King’ and the success of Blackburn as a cotton town.
During the height of cotton manufacturing there were over 149 cotton mills in Blackburn, making it a key area of employment. Blackburn’s cloth merchants did much trade with India but in time India realised it would be cheaper to cultivate and weave cotton themselves. As the local cotton industry declined, Blackburn loom manufacturers, such as Northrop, exported their looms all over the world including India and so sealing Blackburn’s decline as a cotton-manufacturing town.