The E. J. Hardcastle Collection by Dr Cynthia Johnston: Arch Webb, The Thick of the Fight

Arch Webb, The Thick of the Fight 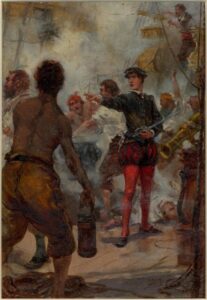 20 May 2020
By Dr Cynthia Johnston, Institute of English Studies, School of Advanced Study, University of London

Even in the context of Hardcastle’s collection which features some of the most prolific artists of the English ‘Golden Age’ of illustration, Arch Webb (1887-1944) stands out as a supremely proficient producer. In his 2019 book, The Men who drew for Boys (and Girls): 101 Forgotten Illustrators of Children’s Books 1844 – 1970, Robert J. Kirkpatrick suggests that Webb illustrated at least 150 children’s books, mostly of the adventure variety that we encountered earlier in the John Henry Spencer Collection of Children’s Books held by the Harris Museum, Library and Art Gallery in Preston. Webb’s work is to be found in Harold Avery’s boarding school books, the adventure stories of R.M. Ballantyne, G.A. Henty, W.H.G. Kingston and Frederick Marryat as well as many still popular titles including E. Nesbit’s The Railway Children and Anna Sewell’s Black Beauty. Webb also illustrated serial stories which appeared in periodicals that catered for the same sorts of readers who devoured Henty and Avery including Chum, Boys’ Own Paper, Young England and The Strand. Webb’s style is reminiscent of N.C. Wyeth, with romantic naturalistic settings in which he places his energetic figures. He presents historical costumes with flowing drapery, dramatic landscapes and stormy skies all designed to hold the imagination of his young audience.

Although John Archibald Webb became a member of the Royal Society of British Artists in 1890, there is no evidence for his formal training. This may have come from his family, as his grandfather was a famous maritime painter, another Archibald Webb (1792-1883), and his uncles, James and Byron, were both successful artists as well. Webb’s decision to sign his work ‘Arch Webb, RBA’, may have proceeded from the necessity to distinguish his work from his grandfather’s as well as that of another successful contemporary illustrator, Archibald Bertram Webb (1887-1944).

At length the sun went down, illustration by Archibald Webb from A Story of the Times of Benbow, by William Henry Giles Kingston.

This small sample of the 500 artworks in the Hardcastle Collection reflects not only the collecting flair of Edwin James Hardcastle himself, but also the depth of illustrative innovation that thrived during this period. While Hardcastle’s life and his intentions as a collector are still elusive, it is clear that he was aware of the contemporary art world and that his large collection registered an ambition to record this period of innovation and excitement. Hardcastle’s obituary records that he had personally reassembled the Italian sketchbooks of the famous Halifax portrait painter, Joshua Horner. Perhaps it was his fascination with the working methods of artists that led him to collect these original artworks as opposed to prints.

Tomorrow we go large with Walter Stritch Hutton’s imposing, yet playful, painting, They See an Oread, on loan from the Grundy Art Gallery in Blackpool.