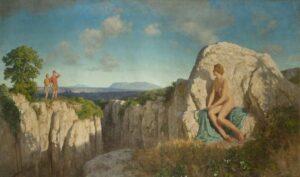 21 May 2020
By Dr Cynthia Johnston, Institute of English Studies, School of Advanced Study, University of London

Walter Charles Stritch Hutton, (1871-1953), was a contemporary of the collectors featured in Holding the Vision. In this painting, he playfully captured the idea of the appearance of the visionary in ordinary life. In They See an Oread, a couple out for a hike stop and stare, with some trepidation, at the vision they spot on the opposite side of a ravine. This mountain nymph has materialized from the realms of myth into the prosaic present of sensible shorts and hiking sticks. It is this sense of the visionary imagination transported by the power of the art of the book that Holding the Vision seeks to suggest.

This painting is extremely large, even by late Victorian standards. Measuring 110 x 202.5cm in a heavy gold frame, the painting must have been designed to dominate its surrounding space. The oils are rich in colour and the scene is a romanticized vision of a rugged mountain setting. Are we in Greece, or perhaps the Lake District? Hutton painted other mountain settings such as his 1903 work, Sunset in the Pyrenees, although this was on a much smaller scale (17 x 23cm). There are other outdoor scenes such as Continental River Town (1886); this too is a small scale watercolour. Most of the other works which I have been able to trace to Hutton are domestic scenes; Geoffrey the Artist’s Son, with a cricket bat (1895), and Two Sisters by a Garden Gate (undated). This last painting, as well as another on a similar theme reproduced here entitled simply, Sisters, are on a much larger scale. Sisters approaches the scale of They See an Oread, at 200 x 132cm, although in portrait as opposed to landscape orientation.

Very little is known about Hutton other than he was a professional painter, and that he spent much of his life in Dorset. He lost his son, Michael, who died in action during the Second World War in 1941. A small unframed oil titled Portrait of a Staff officer of the Royal Army Ordinance Corps, attributed to Hutton, was sold at Christie’s for £240 in 1993. This may be a portrait of this lost son killed in action and buried in Libya.