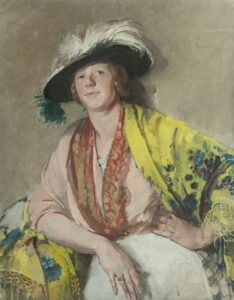 ‘Hardy of Chelsea Green’ by the artist Philip Connard hangs in our Victorian Gallery and her ‘sass and attitude’ has made her a staff favourite. In this period of Remembrance however, we are looking more closely at the artist who served as an Official War Artist in the Royal Navy in World War One.

Philip Connard came from Southport in Lancashire and worked originally as a house painter. Part-time evening classes resulted in a scholarship to the Royal College of Art to study textile design. His training as a painter began in 1898 when, with the aid of a British Institute travelling scholarship, he enrolled at the ‘Atelier Julian’. 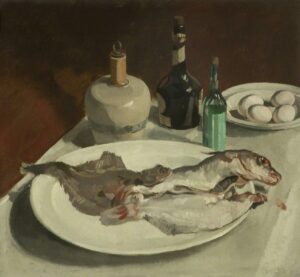 On his return to London, Connard earned an income as illustrator for Bodley Head, and from teaching at Lambeth School of Art. From 1906 he became a regular exhibitor at the New English Art Club. Connard developed as a landscape painter of often striking, brilliant effects and also as a portraitist; he was a founder-member of the national portrait Society in 1911.

When World War One broke out, Connard, who was nearly 40 years old, volunteered and joined the Royal Field Artillery. He was invalided home after the battle of the Somme in 1916 with severe ‘shell shock’ and by 1918 he was serving as an Official War Artist in the Royal Navy.

Official war artist schemes were set up by the British Government to document the different aspects of the war. Commissioned artists captured scenes of combat, new technology and the impact of war on the home front providing a record of the conflict and a source of propaganda. Connard’s paintings portrayed the daily lives of the sailors as well as the ships and submarines they served on. This collection of work is now held at the Imperial War Museum in London.

Connard went on to join the Royal Academy in 1918 and became Keeper of the Royal Academy School in 1945. He lived in Richmond from 1932 until his death in 1958. His work during WW1, along with other War Artists, documents and shapes our interpretation of war and acts as a Remembrance of those who fought for their country and beliefs.