Whilst the museum is rightly famous for its collections of books, coins and fine art etc., it is also home to smaller collections and a treasure trove of other artefacts, often individual donations. It is from amongst this latter category that I have drawn the subject for this post.

Working in a museum, you find yourself thinking of the story that might lie in an object’s past and so it is with this small, woman’s powder compact. The compact once held face powder and a small powder puff to apply it. The inside of the lid is a mirror. A portrait of an ocean liner, the RMS Baltic, is painted on the outside of the lid. Compacts like this were sold on the ship, to passengers as souvenirs.

So far, so dull, but what of the ship itself? Here the story gets more interesting. Entirely forgotten today; RMS Baltic had a fascinating history.

The RMS Baltic was launched in 1903; she belonged to the famous White Star line and at the time, she was the largest ship in the world. RMS Baltic was used in the Trans-Atlantic passenger trade; her first captain was Edward Smith, who was later to die as captain of RMS Titanic.

Her claim to fame lay in a swirling bank of fog off the coast of Massachusetts in the early morning of 23rd January 1909. On this day a liner, the SS Republic, was proceeding with caution, when out of the fog loomed another liner, the SS Florida, which hit the SS Republic amidships on the port side, inflicting fatal damage to the ship.

On the SS Republic, wireless operator Jack Binns clambered into the remains of his office, salvaged his radio equipment and began to tap out a distress signal on the Morse key of his radio set. Radio sets like his were a new innovation on ships. A shore station at Nantucket picked up the message and rebroadcast it. The RMS Baltic responded, making her the first ship ever to respond to a radio distress signal.

Arriving at mid-day the RMS Baltic took on board all of the passengers and most of the crews of the two ships – 1,540 people in all. This remains the record for the largest transfer of people between ships at sea. 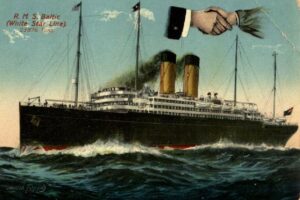 This rescue seemingly confirmed the decision of the shipping companies not to provide enough lifeboats for everyone on a ship. They thought that in busy shipping lanes a liner equipped with radio would always be able to summon ships to rescue the passengers before it sank. Tragically, the loss of the RMS Titanic, three years later, would brutally disprove this theory.

It is tempting to think that the woman, who bought to our powder compact as a souvenir, was a passenger on that fateful voyage and witness to that momentous rescue. We will never know the answer but it remains a reminder of the days when those majestic ships plied their trade on the world’s seas.