A provincial Russian Icon of Saints Helena and Constantine, ca 1700 by Mike Millward 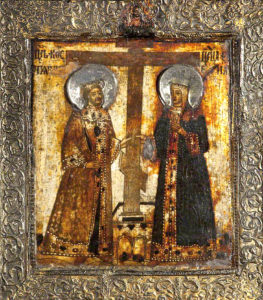 This small picture in the collection at Blackburn Museum & Art Gallery, is just over a foot high (31 x 27 cm). It was painted in tempera at least 300 years ago, is not particularly beautiful and looks in need of some restoration. Despite this, the silver frame and halos suggest it has some value. It symbolises a great deal of history, both political and religious: what is it, what does it mean and how did it end up in Blackburn, Lancashire?

Icon is a Greek word meaning “image”. Early Christians used it to describe an image of a sacred person or event used as a focus for prayer and the term was adopted by Orthodox Christians for portable images painted on wood and venerated. Icons are the most numerous holy artefacts of Orthodoxy, having a significance which sets them apart from other Christian images. Orthodox Christians use icons as a “window into heaven” and a source of intercession. This invites accusations of idolatry, but to the Orthodox believer, veneration is not the same thing as worship: the worship is directed not towards the icon itself, but to the subject of the icon.

This icon was made in provincial Russia, probably just before 1700, most likely for private use rather than for use in a church. At the time it was made, long after the defeat of the Byzantine Empire by the Ottoman Turks, Russia was the leading force in the Orthodox Christian world, and literally millions of icons were made there. They were a vital part of religious life from the Tsar down to beggars in the street. The Revolution of 1917 brought Russian Orthodoxy officially to an end, until the collapse of the USSR allowed it to flourish once more.

The icon shows Constantine the Great (died 337), founder of Constantinople and the first Christian Roman Emperor, and his mother Helen or Helena (ca.250-330) standing on either side of and holding the cross on which Christ was crucified; Christ blesses them from above. The crossbar on which Christ’s feet would have rested is inclined, symbolising the repentant thief to Christ’s right who went to heaven and the unrepentant thief on his left who consigned himself to Hell. Constantine and Helen wear tsarist robes of the time of Peter the Great who ruled from 1682 to 1725, the period in which this icon was made.

Constantine is recognised as a saint by Orthodox Christians, but not in the West, unlike his mother, who is recognised in both East and West. As well as the many English churches dedicated to her, she has a town in NW England named after her, and a superb series of medieval stained glass windows illustrating scenes from her life in St Michael’s Church, Ashton-under-Lyne.

Constantine, the son of the Emperor Constantius, was proclaimed Emperor in York in 306 and began his preparations for consolidating his position against his main rival Maxentius. The decisive battle took place in 312 on the outskirts of Rome at the Milvian Bridge over the Tiber. Before the battle he is said to have received a vision of a cross of light and the Greek words “Εν Τούτῳ Νίκα”, which translates as something like “Through this sign you shall conquer” and the following night Christ appeared to him in a dream and told him to use the sign against his enemies. Whatever actually happened, Constantine won and achieved total control of the Empire. The following year the Edict of Milan officially recognised Christianity as a tolerated religion in the Roman Empire, ultimately paving the way for it to become the dominant European religion.

Despite all this, Constantine does not seem to have personally adopted Christianity until he was baptised on his deathbed, and while the inscription on his Triumphal Arch in Rome acknowledges divine intervention in his victory, it does not specifically mention Christianity.

Piero della Francesca: The Finding of the True Cross. Fresco in the Church of San Francesco, Arezzo, 15th century/Public Domain

His mother Helen on the other hand, became a devout Christian and towards the end of her life made a pilgrimage to the Holy Land where legend has it, she discovered in Jerusalem the site of the Crucifixion and the remains of the True Cross. She died there in ca.330.

Constantine moved the capital of the empire to Constantinople in 330 and the Western Roman Empire eventually fell to the Barbarians. Byzantium became the de facto Christian Empire, surviving for a further millennium until conquered by the Ottoman Turks in 1453.

Rome continued to house the supreme head of Christendom, and the resulting tensions developing between Roman Catholicism and Eastern Orthodoxy eventually caused the Great Schism of 1054, which has never been resolved.

Blackburn Museum & Art Gallery houses a significant collection of icons, one of the largest in the country, all acquired since 1970 from a variety of sources. The icon of Constantine and Helen came into the museum in 1982 as part of a number of icons through the Art Fund.

More to come:
• How Icons are made
• How the Blackburn Collection came into existence