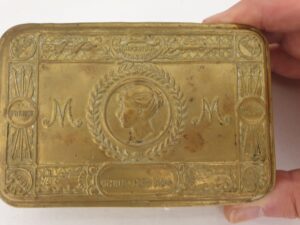 Milk or plain, there are not many of us who don’t like an occasional nibble on a piece of chocolate. Similarly, we all like to think of ourselves as moral beings who, when push came to shove, would ‘do the right thing’.

However, for some people their strict moral code can force them to have to make a difficult choice. In this case, the people placed in this situation were the three main UK chocolate manufacturers – Cadbury, Fry and Rowntree.

All three companies were family owned businesses. The three families were also devout Quakers, a Christian sect that was (and is) strongly pacifist and opposed to war. They were renowned for their philanthropic work and the good working conditions in their factories.

However, in 1899 and again in 1914 they faced a dilemma. In October 1899, the Second Boer War began, fought between Britain and the two Boer Republics. Shortly before Christmas, Queen Victoria commissioned the three chocolate companies to make sufficient bars of chocolate to fill 123,000 tins, which would be sent to the troops in South Africa, as a Christmas gift.

This would have been a lucrative contract but the families, as Quakers, were in a dilemma; they opposed war but could they refuse the Queen’s request?

In the end, they made the chocolate bars but refused to accept payment for the order, as they did not want to profit from war.

In October 1914 Princess Mary launched an appeal to fund every member of the armed forces receiving a Christmas gift.

The money raised was used to manufacture small boxes, most made from brass, and usually filled with an ounce of tobacco, a packet of cigarettes, a cigarette lighter, a Christmas card, a photograph from Princess Mary.

However, they made an allowance for non-smokers, different faiths and Imperial soldiers, such as Gurkhas and Sikhs as well as the nurses serving overseas.

Sadly, our Princess Mary Christmas gift box is empty but many were sent home as souvenirs to family members. So, today you can still find these boxes with their original contents.

The advent of war in August 1914 and the social pressure on men to enlist meant the three chocolate companies and many of their employees were once again facing the same moral dilemma – how to respond in the face of war.

Cadbury’s, along with Rowntree and Fry, made an undertaking in line with Quaker, pacifist principles; each worker would be allowed to follow their conscience and to do what they felt to be their duty to their country. If they chose to enlist, they would be able to return to their former job at the end of the war.

The responses of the two sons of the owner of Cadbury’s, Egbert and his older brother Lawrence, sum up the dilemma faced by these men. Egbert chose to join the navy and later transferred to the Royal Naval Air Service, he became more and more disenchanted with the war, making some very pungent comments about some of his fellow officers, nevertheless he shot down two Zeppelins and wrote “…a horrible sight… I could not say I felt very elated or pleased at this…”

His brother Lawrence refused to fight but joined a, Quaker funded, Friends Ambulance Unit and served in France. The sights he witnessed serving at the frontline slowly changed his opinions and he became more of a supporter of the war.

Both men survived the war profoundly affected by the choice that they had made.