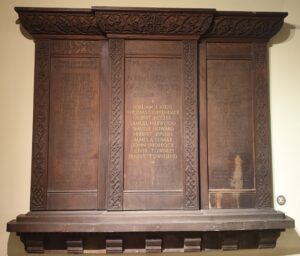 The years during and after the First World War saw a huge number of war memorials created in Britain. Many of these were in public spaces but many more were inside buildings and in the 100+ years since then a lot of those building have been demolished or re-purposed. In these cases the memorial has either been lost or has been moved and many of them find their way into Museums; Blackburn museum is no exception in that it now finds itself home to several war memorials.

Currently, the Museum has two memorials on display and one of those is from Greenfield Mill that used to stand in Spring Vale, Darwen.

The memorial is a ‘served and died’ memorial. There are 75 names listed, of whom the ten men listed on the central panel died. The names on the flanking panels are those of the men and women who returned home at the end of the war.

From a social history perspective, the memorial is fascinating because it lists everyone from that working class community who went to war. With so much material now online, it is possible to explore the backgrounds and fates of these people.

The Webb family owned Greenfield Mill; as Quakers, they were committed to the welfare of their staff and staunch in their opposition to war and pacifist principles. As a result, when the war began they faced a dilemma – their duty to God or their duty to country. One of the sons of the family, Stanley Webb Davies registered as a Conscientious Objector and worked in France building huts for displaced families. When the war ended he became a carpenter and the war memorial was his first commission.

Corder Catchpool, the welfare officer, became a member of a Friends Ambulance Unit, serving in France; when conscription was introduced in 1916, he resigned and spent the rest of the war either in court or in jail as a protest again the war.

There are six women named on the memorial, one of them, Mary Holden, served as a VAD in a Canadian Military Hospital. At least two of the men were discharged from the Army as disabled. They would have received a small pension and a silver war badge to spare them the attentions of the white feather girls.

Of the ten men killed, half were weavers. The oldest were two men in their early thirties and the three youngest were teenagers.

One of the men, aged 19, was an only child while two others also had siblings who were killed. Tragically, one man died four days after the war ended. He died as a prisoner of war and is buried in Cologne.

From the workers at Greenfield Mill, the war left two widows and three children fatherless.

The war must have marked all of these people named on the memorial. How these families managed their grief, we can never know. Their lives are over and their community long gone.

We can only remember them.