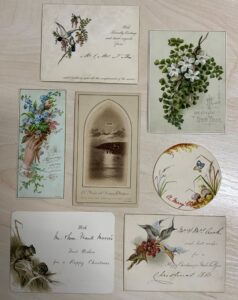 The way we celebrate Christmas today is very much a Victorian invention and Christmas cards are no exception. However, the style of Christmas card has changed a lot. The seven cards shown here date from the 1880s and there isn’t a snowflake in sight.

The changes wrought in Britain by the Industrial Revolution changed Christmas forever. The “Penny Post” was first introduced in Britain in 1840. This meant that a penny stamp paid for the postage of a letter or card to anywhere in Britain. The popularity of this idea paved the way for the sending of the first Christmas cards. The first cards were printed in 1843 and proved an immediate success. The popularity of sending cards was boosted in 1870 when the new halfpenny postage rate was introduced.

Early British Christmas cards rarely showed winter or religious themes, instead they favoured flowers, fairies and other designs that reminded the recipient of the approach of spring. Also popular were sentimental images of children and animals, as were elaborate shapes, decorations and materials.

For Christmas 1873, the firm of Prang and Mayer began creating greeting cards for the British market and the following year the firm began selling Christmas cards in America. By the 1880s, the company was producing over five million cards a year. The popularity of their cards led to other companies entering the market, producing more and cheaper cards.

The earliest Christmas card in our collection is shown here and dates from 1881. It is the pale blue card with a hand holding the bunch of flowers.
If this is a topic you would like to find out more about, Manchester Metropolitan University holds a huge collection of Victorian and Edwardian greeting cards, including Britain’s first commercially produced Christmas card.