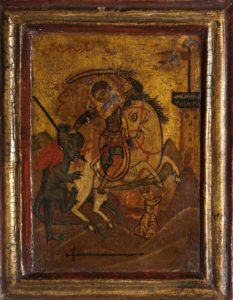 Given Saturday 23 April is Saint George’s Day, I thought I would draw attention to the icon in the collection at the museum that features Saint George.

Blackburn Museum has the largest public collection of Russian icons in the UK outside of London. There are a total of 60 icons in the collection currently. At any one time around 21 are on public display.

If you have visited the Hart Gallery you will have seen on display a large icon which features Saint George, currently on loan from an individual. This icon is very impressive; however this blog is an opportunity to tell you more about the Saint George icon that is currently not on display but behind the scenes in storage.

Icons were first made and worshiped by Christians during the early centuries of Christianity. Images helped people to understand the teachings of the religion and they continued to be used by Orthodox Christians. The reverence of an icon must be done with the understanding that it is not the icon or artwork that is being respected but rather the person or event it is portraying.

Why does Blackburn have such a large collection of icons?

In 1941 Mr Thomas Boys Lewis gave 13 religious Icons to Whalley Abbey. Thirty years later in 1971 the Blackburn Diocesan Board of Finance proposed to sell the icons at auction. The icons were intended for sale at Christie’s were even given lot number and published in a sales catalogue! However, there was an ‘Eleventh hour reprieve’ as recorded in the Blackburn Times.

The son of Lewis stressed the importance of them not being sold off. His father had collected them and he believed they should stay together in Blackburn. Blackburn Corporation made an offer to purchase them to keep them in the Blackburn Museum and Art Gallery. Without this important purchase, Blackburn would have never been considered for the further two gifts that make up the majority of the collection.

In 1982 the National Art Collection Fund received a bequest in the will of a lady who wished to leave her collection of 18 Nineteenth Century Russian icons to the nation. It was their task to find a suitable home for them. It was because Blackburn Museum had purchased the icons from Whalley Abbey that the gift was made.

A total of 39 icons were seized at Weymouth by HM Customs & Excise in 1993. A vessel had sailed from Klapiea, Lithuania and the icons found on board were sent to the British Museum for identification. They identified them as not of high value and that they probably belonged to Russian peasants. Blackburn Museum was recommended by the British Museum as being a good home for a large number of the icons and 27 came to Blackburn in December 1993.

This icon that depicts Saint George comes from the original Lewis collection purchased in 1971. It shows Saint George fighting with the dragon in a dramatic form. George wears a Roman or Byzantine armour complete with a golden breast plate. The dragon is releasing a flame from its mouth, but it has already been run through by Saint George’s spear.

It is thought this one was made in the mid-1800s and comes from an area where Arabic speaking orthodox or uniate Christians were living. This would explain the Arabic lettering above the Saint’s head. There are six small nails just visible around the head of Saint George, indicating that at some point the icon possessed a halo.

Now all that’s left to do is celebrate England’s patron saint!