Saint George and the Dragon 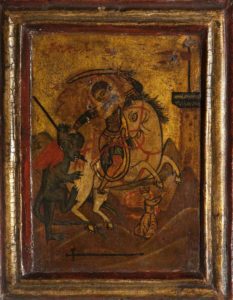 St George was born in Cappadocia in the late 3rd century AD. As a child he lived in Lydda, Palestine with his widowed mother who raised him in the Christian faith. He was a Roman commander during the time Emperor Diocletian ordered the persecution of Christians but he refused to be part of it. Following his refusal and subsequent confession of his faith he was tortured, then beheaded. Throughout the torture he held onto his faith. In fact, it is said that his confession caused some of those who witnessed it to convert to Christianity, including Emperor Diocletian’s wife Empress Alexandria. After his death his relics were kept at Lydda for veneration by Christians.

St George has been revered by Christians since his martyrdom in AD 303. His image in icons and other art forms remains consistent because they are based on his actual physical appearance due to the early widespread devotion to him. Since the martyrdom of St George, Christians believe that God has worked many miracles through him. One of the most represented miracles is that of St George defeating the dragon. These icons are a symbol of St George overcoming the devil.

Icons were first made and worshiped by Christians during the early centuries of Christianity. Images helped people to understand the teachings of the religion and they continued to be used by Orthodox Christians. The reverence of an icon must be done with the understanding that it is not the icon or artwork that is being respected but rather the person or event it is portraying.

Icons of St George commonly place him outside the town of Silene in Libya. He rides a white horse and rescues a princess who has been sent by the non-Christian townsfolk as a sacrifice to the dragon. He wears a heavenly crown (although the crown from our icon is missing) and quite often is depicted receiving the blessing of Jesus from the heavens. He wears the red cloak of martyrdom and is reminiscent of the conquering soldier and hero on his charging white steed. The dragon is frequently depicted as a serpentine dragon which is a representation the devil. The story says that the people of Silene were so impressed by the miracle of St George defeating the dragon that they became Christian. The image therefore shows that St George is not only conquering the devil and his evil but also conquering non-Christians by converting them to the Christian faith.