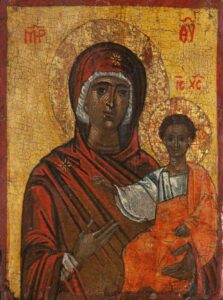 The Mother of God Hodigetria, Anatolia, 17 c
from the collection of T B Lewis

This is the story of how a provincial municipal museum came to acquire a large and unusual collection by a series of incidents and coincidences. It shows how, while it would have been difficult to justify before the event, such a collection eventually became a valuable and well regarded asset: the collection of icons at Blackburn Museum and Art Gallery is amongst the largest in the country.

When I left Blackburn Museum in 1969 after a spell as keeper of art, there were no icons in the collection at all, and indeed, I had little more than a hazy idea of what they were. I returned as curator in 1976 to find my responsibilities included a collection of thirteen. By the time I finished work at the Museum 20 years later, there were more than sixty. Where had all these icons come from? What prompted the accumulation of these objects with little apparent connection with East Lancashire? How did the collection grow to become so large and important?

The story starts in 1942, with the bequest to Whalley Abbey by Thomas Boys Lewis of his collections of icons and Limoges enamels. His other bequests included an important collection of 1000 Japanese prints to Blackburn Museum & Art Gallery, and he is probably best known as the founder of the Lewis Textile Museum, which stood in Exchange Street, Blackburn until closed by the council in 2006 and its collection of textile machinery moved into the main museum building. 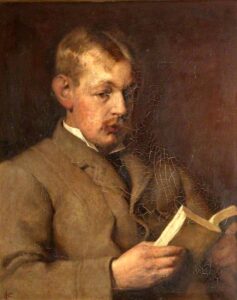 Portrait of T B Lewis by Hillary Coddington Lewis, 1904 bequeathed to Blackburn Museum & Art Gallery by R B Lewis, 1963

In late 1970, the Lancashire Evening Telegraph reported that the Blackburn Diocesan Board of Finance planned to sell the icons and enamels, despite the expressed wishes of T B Lewis, and the forceful objections of his son Richard.

The Museum, then part of Blackburn Library Service with which it shared the building, only learned of the sale through press reports, and despite very short notice, considered bidding for the enamels at Christies sale in October 1970. In the end this did not happen, and the enamels were sold.

The 13 icons were intended for sale at Christies on 19th January 1971, and were listed in the sale catalogue, lots 74-86. As a result of pressure by Richard Lewis and an approach from the Museum, the Diocese withdrew the icons in order to negotiate a private sale to Blackburn Museum. In April 1971, the Museum purchased them all with the aid of a 50% grant from the Victoria & Albert Museum Purchase Fund, generating enough interest to be reported in the Times and Daily Telegraph.

The icons were soon on display at the Museum. Their origins include Greece, Asia Minor, Russia and Syria. One needed urgent conservation and this was undertaken at the North West Museum Service at Griffin Lodge, Blackburn (the conservation team are now based at the Conservation Studio, Preston as part of Lancashire County Council). The estimate for the repair quoted 20 hours work at 25p per hour plus materials; it would be a lot more today! 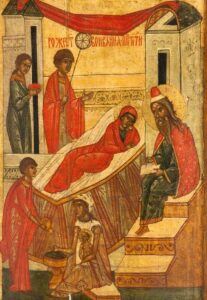 The Birth of John the Baptist, Russia, c1500
on loan from the Strang collection

After an initial flurry of interest, the icons, like many other museum items, spent much of the next few years in storage.

In 1974 the Local Government Reorganisation saw the Museum become part of the Blackburn Recreation Department and occupying the entire former library building.

In 1980, the Museum was offered on loan three high quality icons from the Strang Collection. The loan was made by Professor Colin Strang and have remained on loan to Blackburn since his death in 2014. 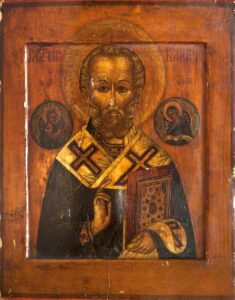 Saint Nicholas, Russia, 1705
from the collection of Kathleen Fenwick

In 1982 the National Art Collections Fund (now the Art Fund), received a bequest from Miss Katherine Fenwick of Reading of 18 Russian icons. They were offered to Blackburn Museum as a suitable repository for an icon collection, resulting in the Blackburn collection more than doubling in size. Miss Fenwick had been a regular on the London auction houses circuit, but as far as I know, had never visited Blackburn.

This significant addition prompted a new look at the icon collection and the planning of an exhibition with valuable expert help from Brother Aidan, an Orthodox monk and icon painter. He also produced a demonstration set for the Museum showing the stages of icon production, which I will focus on in a future blog.

A fine early 18th century full length Russian icon of the Forefather Abel, the First Martyr, which would once have been part of an icon screen in a church, was purchased by the Museum and included in the exhibition.

The success of the exhibition, which attracted much attention, especially from Orthodox communities throughout Britain, prompted the creation of a purpose built Icon Gallery on the mezzanine above the Hart Gallery. Interest in icons was increasing, and it is now common to see them in western churches. The Hart Gallery has since been completely redesigned, and the icons incorporated within the displays of books, manuscripts, coins and Japanese prints.

The most unusual acquisition I have personally experienced occurred in 1993. Thirty-nine Russian icons were seized at Weymouth as contraband by HM Customs and Excise from a crew member of the MV Nida, which had sailed from Lithuania. The icons were 19th and early 20th century, small and not of great quality or value but included many unusual subjects. Some were added to the collections at the British Museum and on their suggestion we were offered the pick of the rest. Adrian Lewis (Head of Arts Services) examined them in London and chose 27 for the collection. By December 1993 the collection had almost doubled in size again.

To mark the millennium, a beautiful Russian icon of St Vsevolod, Grand Prince and Wonder Worker, made in Pskov c1575, was purchased with the help of the Friends of the Museum and grants from the Art Fund and the Victoria & Albert Purchase Fund. Today there are 63 icons in the Blackburn Museum collection, accumulated more or less by chance and entirely the result of a decision by Blackburn Diocese to sell the Whalley Abbey icons. Almost all the subsequent icon acquisitions are from sources unconnected with Blackburn.

Despite the serendipitous nature of the Blackburn icon collection, they fit surprisingly well into the rich and extraordinarily diverse material here. Blackburn has excellent collections of coins, Japanese prints, manuscripts, printed books and English watercolours which relate to Blackburn only through the local benefactors who gave them. 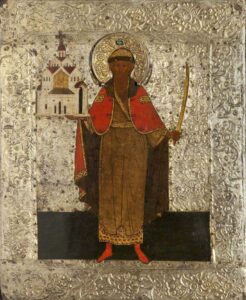 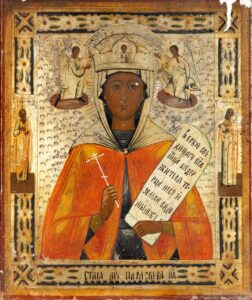