A View of the Invisible World; Or A General History of Apparitions

This volume is attributed to Daniel Defoe, and was published first in 1752, following Defoe’s death in 1731. Defoe had written earlier essays on the subject, most notably his Essay on the History and Reality of Apparitions: Being an account of what they are, and what they are not; whence they come, and whence they come not, in 1727. It is clear that supernatural phenomenon were an interest for him. There is even a treatise on angelology, ‘A Vision of the Angelick World’ appended to the sequel to Robinson Crusoe, entitled Serious Reflections during the Life and Surprizing Adventures of Robinson Crusoe, published in 1720. Defoe is not unusual for his time in a belief in spirits; interest in the supernatural was a central cultural fascination of the eighteenth century. Maximillian Novak, in his article, ‘Defoe’s Spirits, Apparitions and the Occult’, (Illinois, 2009), positions Defoe’s belief as centrist in terms of generally perceived truths regarding the supernatural. Novak points out that even uber-empiricists like John Locke did not rule out the existence of a spirit world. Locke suggested that human beings may not possess heightened enough sensory perception to perceive them. 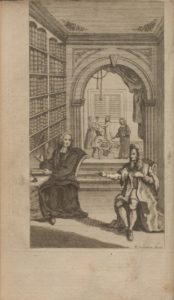 Spencer’s volume, published by J. Schofield of Manchester in 1854, retains the original format of the 1752 publication. It includes an introduction, followed by a series of stories of supernatural encounters told by a variety of narrators, and runs to 312 pages. It opens with a smart copper engraved plate and includes 3 other illustrations. Many of the stories involve the summoning of an outside party, an independent investigator of sorts, to ascertain the veracity of the reported supernatural occurrence. The story of ‘An Account of a most surprising apparition, sent from Launceston in Cornwall by the Reverend Mr Ruddle, the Minister there’ is a typical example of the template. In this case, the outside investigator is the enquiring minister, Mr Ruddle, who is asked to resolve the strange, and most unsatisfactory behaviour of a young man, who refuses to cross a field or to attend school or to carry out any of his required duties for fear of a spirit who seems to follow him when he attempts to use an essential path across this field. The boy’s parents doubt his story, and are cast into deep despair about his unreliable, perhaps even duplicitous and lazy character. The Reverend Ruddle however, after deciding that the lad’s despair is real fear, accompanies the boy on his walk. Ruddle also witnesses the appearance of the silent, gliding female spirit who is identified as the recently departed Dorothy Dingley. The situation is resolved by Ruddle addressing the spirit, who softly replies. Ruddle does not reveal what passed between them, but the ghost of Dorothy Dingley never returns. Ruddle is not wearing a boiler suit nor carrying a particle accelerator in a ruck sack a la Ghostbusters, but his direct address to Dorothy is just as effective.