The Adventures of William Friendly, with some particulars about Dick Wildgoose 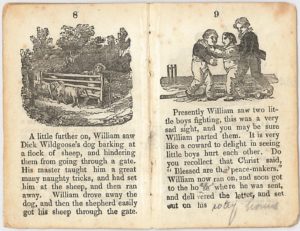 The adventures of William Friendly, with some particulars about Dick Wildgoose, (London: printed by Knight and Davis for J. Davis, c. 1835). Loaned by the Harris Museum, Art Gallery and Library. Image © Harris Library, Preston.

The Adventures of William Friendly, and the feature of yesterday’s post, The Lily, were published by the same London printer, Knight and Bagster in 1825. The number which appears on the title page of this book, (# 20) indicates that it was part of a series. The series’ titles indicate their moral purpose: #13 The History of Sally Meanwell, #23 The History and Troubles of Peter Pliant, #28 The History of Anne Lively and her Bible, and #30 The History of Sammy Sly and some advice on how to avoid being like him. The titles give a fair summary of the contents of this run of publications. (They remind me of the Mr Men and Little Miss books popular in the 1990s. Little Miss Scary, Mr Rush, Mr Slow and Little Miss Bossy don’t seem too much of a stretch from William Friendly and Dick Wildgoose.) 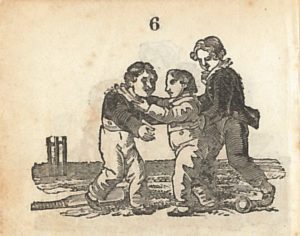 The printers saved money by reusing the same illustration for different scenes. Here is the same print used in The Lily. Loaned by the Harris Museum, Art Gallery and Library. Image © Harris Library, Preston

Each book has 16 pages (they were usually printed from a single sheet which was cut and folded to form the book) and there is a wood cut on every page. The printers have saved money by reusing the same illustration for different scenes from The Adventures of William Friendly and The Lily. The scene in The Lily, features a young student called William dispersing a punch up between the clever scholar Tom Hardy and his naughty and elder classmate, Jem Saunter. William cautions, ‘By pride cometh contention’. In The Adventures of William Friendly, the same wood cut is used for William Friendly’s intercession between two small boys fighting, although here it appears that our protagonist is perhaps the figure on the right who is a head taller than the two central fighters. The focus for this scene is not pride, but rather Christ’s dictum, ‘Blessed are the peace-makers.’ It is impossible to tell for which story the wood cut was originally intended, if indeed it had an original destination at all. It may have been produced as scene that could be used in just this way in a wide variety of applications. In fact the cricket bat and stumps and bales which appear in the illustration suggest that it may have been created for another narrative entirely. 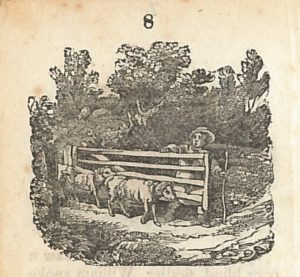 From The adventures of William Friendly. Loaned by the Harris Museum, Art Gallery and Library. Image © Harris Library, Preston.

A later reader of The Adventures of William Friendly has filled in with pencil some of the compositor’s mistakes on this page: an ‘e’ has been supplied for ‘the’, and ‘ho se’ has been amended to ‘house’, and the final sentence of the page has been completed with the words ‘way home’. On the preceding page, William Friendly is sorting out another mess created by Dick Wildgoose, who has set his dog upon some sheep, and run off. William drives off the dog so that the shepherd can get the sheep through the gate. The shepherd and his sheep are shown, but there is no trace of William Friendly which might suggest another wood cut whose subject is ambivalent enough to be used in a variety of formats.

The folkloric character of Dick Wildgoose appears in rather more vexatious form here than in Oliver Goldsmith’s description of the character in one of his essays for The Bee published in 1759 entitled ‘Happiness, in a great measure, dependent on constitution’. Goldsmith rather admires his hapless Dick Wildgoose who ‘was one of the happiest silly fellows I ever knew’. Goldsmith concludes:

“The world, in short, may cry out at a bankrupt who appears at a ball; at an author, who laughs at the public which pronounce him a dunce; at a general, who smiles at the reproach of the vulgar; or the lady who keeps her good humour in spite of a scandal; but such is the wisest behaviour they can possibly assume. It is certainly a better way to oppose calamity by dissipation, than to take up the arms of reason or resolution to oppose it: by the first method we forget our miseries, by the last we conceal them from others. By struggling with misfortune, we are sure to receive some wounds in the conflict: the only method to come off victorious, is by running away.”

Our Dick Wildgoose, not pictured in this last wood cut, has done just that, and Goldsmith would have heartily applauded his efforts.