The Lily, A pretty book for Good Children 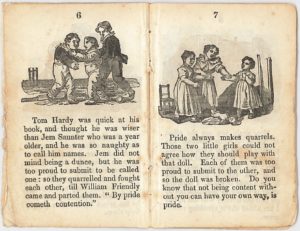 This little book was the collaboration of two sisters, Ann (1782-1866) and Jane (1783-1824) Taylor. The sisters were well-known poets who wrote almost exclusively for children. They wrote ‘Twinkle, Twinkle Little Star’, perhaps still one of the first songs we sing to our children even today, but the names of Ann and Jane are largely forgotten. ‘The Star’ (the original title for ‘Twinkle, Twinkle Little Star’) was included in the sisters’ most popular publication, Original Poems for Infant minds in 1804. Jane Taylor also wrote novels and satires, and her novel, Display, published in 1814, went through 13 editions.

The Lily, is sometimes classified as a religious tract although it is in the form of a chapbook. Many chapbooks have Christian morality as their core content. Titles such as The Melancholy End of Ungrateful Children, Anger: A Story for Boys and God’s love for Wicked Little Joseph must have made their points clear. Other titles would have perhaps proved more comfortable reading. Master Henry’s Green Bag; its loss and recovery; the Comic Adventures of old Mother Hubbard, and The Elephant’s Ball imply slightly lighter entertainment.

Chapbooks were sometimes sold in shops, but originally, they were distributed by street vendors or itinerant purveyors of cheap goods known as chapmen. Chapbooks were always small in scale, and light to carry. Tucked in amongst the other wares in the chapman’s barrow such as ribbons, pins, laces, buckles, whistles and fans, were these tiny books.

Spencer’s collection of chapbooks highlights several locations where the production of chapbooks was concentrated. London, as we have seen in these examples, was a particularly active source of chapbook publication. Spencer’s collection also highlights books printed in Glasgow, Manchester and Banbury. Spencer’s articles written for the Preston Herald in the 1940s, demonstrate his keen interest in local history, especially with regard to the popular press. The chapbook collection also features 17 chapbooks printed in Preston. Some of the chapbooks have been bound together into single volumes and carry no further information about their publishers or printers. Many of these examples are popular songs as opposed to stories or rhymes. Some are very local indeed such as Buck-hunting at Stoney Hurst; to the tune of all that sport doth yield. There are also collections or ‘Garlands’ of songs with 4 contained in one book such as The honest Freemen of Preston or A North Briton’s Lament. Others seem to have an adult audience firmly in mind such as The dialogue of Tommy the Frenchman and his doctor and The Turkish Lady. Many of the Preston examples edge towards the penny blood category. Titles such as the Bloody Gardner’s Garland; or The Shepherd’s daughter decoy’d; and The Perjur’d Virgin greatly outnumber the likes of The Conversion and death of Poor Joseph, certainly reflecting what sold like hot cakes, and what was perhaps slower selling, less steamy fare.