G. A. Henty, Through Russian Snows; A Story of Napoleon’s Retreat from, Moscow, 1905 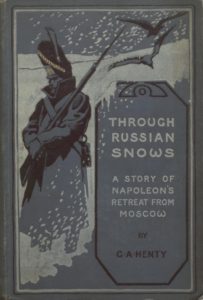 George Alfred Henty (1832-1902) was an immensely popular and prolific writer of adventure stories aimed primarily at young readers. Henty used some of his own experiences in creating his narratives, particularly his role as a young lieutenant during the Crimean War, and later as ‘special correspondent’ for various London newspapers during the Austro-Hungarian and Franco-Prussian Wars. Henty’s heroes are brave, modest and resilient in adversity, and for many they epitomised a Victorian ideal of manhood manifested in the concept of Empire.

Following his recognition as a gifted journalist, Henty embarked upon his immensely successful career as an author of adventure fiction writing his first novel in 1871. Over 120 novels followed; the last written in 1902, the year of his death. He placed his action heroes in a vast range of historical contexts; from 1250 BCE (The Cat of Bubastes: A Story of Ancient Egypt) to 1901 CE (Queen Victoria: Scenes from her Life and Reign), and everything in between. Spencer’s collection contains 23 Henty titles which display a wide range of time frames and cultural settings: Beric the Britain: a Story of the Roman Invasion; Condemned as a Nihilist: a Story of Escape from Siberia; With Kitchener in the Soudan: a story of Abtara and Omdurman and To Herat and Kabul: A Story of the First Afghan War give some idea of Henty’s imaginative range.

Even at the height of his popularity, some of Henty’s themes and his overt British Imperialist views caused offense. He was accused of racism and political bias even by his contemporaries. For modern readers, Henty’s tales are a stark reminder of conservative Victorian attitudes.

The book displayed here, Through Russian Snows; A Story of Napoleon’s Retreat from Moscow concerns the adventures of 2 brothers, Frank and Julian Wyatt from Weymouth. Duels, smugglers, and spies enliven the brothers separate routes to the Russian conflict.