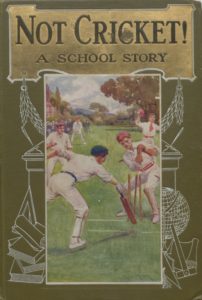 The genre of school stories has been revived by the Harry Potter phenomenon. Beginning with Tom Hugh’s Tom Brown’s Schooldays in 1857, stories about school life soared in popularity during the early 20th century. These novels were most often set in single sex public boarding schools and featured heroes and heroines who were brave, loyal and sometimes subversive; quite reminiscent in fact of those who populate the Hogwart’s House of Gryffindor.

The works of two prominent authors of this genre, Harold Avery (1867-1943) and Angela Brazil (1868-1947; born in Preston) dominate the Spencer collection of this material. The matching cloth bindings with smart gold lettering must have made the accumulation of these books a very satisfying process for the collector regardless of his or her age. Some of the illustrators featured in Holding the Vision: Harry Rountree, Archibald Webb, and John Hassall, a selection of whose original artwork is on loan from Towneley Hall Museum and Art Gallery in Burnley, feature in Avery’s works. Spencer collected all the titles by both authors: 49 by Avery and 48 by Angela Brazil, and they still look splendid sitting on the shelves of the Harris Library’s Special Collections.

Avery drew on his experiences at Eton to craft his stories. The heroes of Chums at Charlhurst, Day Boy Colours, Fifth Form Mystery, Head of the School, Out of the Running!, Play the Game!, Prefect’s Patrol and Talford’s Last Term deliver heroics from disastrous circumstances. Interestingly, the protagonists of these stories are characters who come from the margins of the schools’ societies. New boys, scholarship holders and orphans make their ways to recognition and even to the ultimate goal of prefecthood. Angela Brazil’s female heroines also come from the edges of school norms with regard to background to rise to positions of power. A closer look at Avery’s background reveals that while he was indeed an Etonian, that his family’s fortune came from the manufacture of sewing needles, as opposed to aristocratic descent, and Brazil herself was the daughter of a mill manager and moved from school to school in Lancashire following her father’s employment.