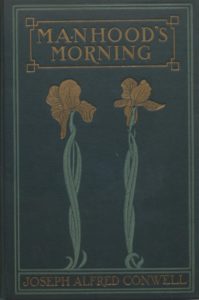 Joseph Alfred Conwell’s Manhood’s Morning: a book to young men between fourteen and twenty-eight years of age reflects middle class anxiety with the rise of ‘dandyism’ associated with the Aesthetic Movement personified by Oscar Wilde. It covertly warns of the sorry lives to be lived by young men who ‘go to seed’. The publisher’s advertisement promises however, that this book is ‘clean and wholesome and can be read by all and occupy a place at the centre table’. This is a conservative Christian riposte to the wave of gender fluidity sweeping through New York City in particular in the wake of Wilde (Joseph Conway was Governor of the state of New Jersey).

The publisher’s trade green cloth binding with gilt lettering and light green irises is a fine example of Arts and Crafts style. Both utilitarian elegance and aesthetic delight were required of the design. It seems a riposte in itself to the contents.

We certainly can’t surmise what Spencer thought of the book, or why he decided to add it to his collection, but he may have enjoyed it with some irony. Spencer himself referred to the 1890s as a period which was for him ‘electric’ with new ideas. There was ‘the New Age, the New Spirit, the New Realism, the New Drama and the New Woman’, all of which he heartily approved. The Teddy Roosevelt brand of American masculinity which Conway endorses in Manhood’s Morning seems unlikely to have appealed to Spencer’s aesthetic sensibility.