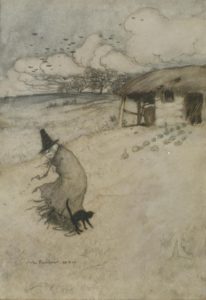 This illustration by Arthur Rackham accompanies ‘The Nurse’s Story; The Hand of Glory’ in this edition of The Ingoldsby Legends. It depicts the ‘old woman of Tappington Moor’:

There’s an old woman dwells upon Tappington Moor,
She hath years on her back at least fourscore,
And some people fancy a great many more;
Her nose it is hook’d; her back it is crook’d,
Her eyes blear and red; On the top of her head
Is a mutch, and on that;  A shocking bad hat,
Extinguisher shaped; the brim narrow and flat!

Thomas Ingoldsby was the nom de plume of Richard Harris Barham (1788-1845), a clergyman who wrote for his own amusement. He began his career as a minor canon of Saint Paul’s Cathedral, and soon after became a ‘priest in ordinary’ of the King’s Chapel Royal. While Barham is mostly remembered for the Ingoldsby Legends, a collection of myths, folk tales and poetry published in three volumes between 1840 and 1847, he was a prolific writer, and published further poetry, essays and a humorous novel, My Cousin Nicholas, in 1834. His work reveals his antiquarian interests, but also his sense of fun.

The poem recounted here deals with a well-documented folk tale which appears across northern European cultures, the legend of the ‘Hand of Glory’. The ‘Hand of Glory’ is made from the hand of a hanged man. Hairs from the hanged man’s head are used to fashion the fingers of the hand into candles, with the hairs serving as wicks. The hand is dried, either in the sun or in an oven, and when it’s ready, an appropriate incantation is made over it activating its power. The ‘Hand of Glory’, when lit, suspends the lives of all, except for the agency of the person who lights the hand. This state of suspended animation enables the owner of the ‘Hand of Glory’ to make off with the valuables of the house. Entrance to the targeted dwelling is also aided by the ‘Hand of Glory’, for when it is used to knock on the door, those within are compelled to open it, and to offer the unexpected traveller shelter from what is always a dark and stormy night.

Now open lock;  To the Dead Man’s knock!
Fly bolt, and bar, and band!-
Nor move, nor swerve; Joint, muscle or nerve,
At the spell of the Dead Man’s hand!
Sleep all who sleep!- Wake all who wake!
But be as the Dead for the Dead Man’s sake!

While some of Barham’s poetry is meant to thrill, his sense of the silly is never far away. The intended victim of this ‘Hand of Glory’ is described thus:

.. the thin grey locks of his failing hair
Have left his little bald pate all bare;
For his full-bottomed wig; Hangs bushy and big,
On the top of his old-fashioned, high-backed chair.
Unbraced are his clothes;  Ungartered his hose,
His gown is bedizen’d with tulip and rose
Flowers of remarkable size and hue,
Flowers such as Eden never knew

Arthur Rackham is one of the most renowned of the artists active during the ‘Golden Age’ of British Book illustration which began in the 1890s and continued through the First World War. His stark pen and ink drawings show some influence of Aubrey Beardsley, as well as Rackham’s journalistic training, but Rackham’s subjects tended towards fantasy. His first major publication was The Ingoldby Legends in 1898. Gulliver’s Travels, and Fairy Tales of the Brothers Grimm followed in 1900. However, it was his first publication in colour for Heineman which cemented Rackham’s reputation as a leading illustrator of children’s poetry and fiction. This first was Washington Irving’s Rip Van Winkle, followed in 1906 by J.M. Barrie’s Peter Pan in Kensington Gardens.

Next time: An introduction to the John Henry Spencer Chapbook collection.