The Book about Animals, (London: The Religious Tract Society, c. 1864)

The Book about Animals was a publication of the Religious Tract Society, already mentioned in this blog as the publisher of the popular periodical Boys’ Own, as well as Girls’ Own, aimed at young readers, and the penny magazine, The Leisure Hour, designed for an older if unsophisticated demographic. The RTS was established in 1799 for the production of evangelical conversion or redemption texts. In the 1860s, with the rise in literacy amongst working and middle-class readers, the Society began to publish novels which dealt with these same themes. Works specifically aimed at children included not only the overtly doctrinal such as the anonymous The Life of Our Lord; His Ministry, Death and Resurrection (1900), but also the self-sacrificing Christianity of texts such as Noble Deeds of the World’s Heroines (1903) by Henry Charles Moore and sentimental exemplars like A Stray Sunbeam by Laura A. Barter Snow, (1900) and The Blind basket-Maker or Led by a Little Child by Florence E. Burch (1907). 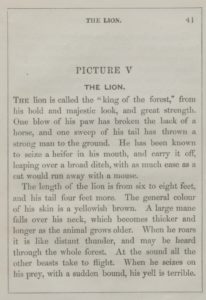 ‘The Lion’, from The Book about Animals, (London: The Religious Tract Society, c. 1864). Loaned by the Harris Museum, Art Gallery and Library. Image © Harris Library, Preston.

The author of The Book about Animals is uncredited, and the prose is formulaic. The 25 animals included in the book are divided into 7 sections beginning with commonplace domestic animals and ending with exotic examples from the far reaches of the Empire. The characteristics of the animals are individually described, and a personal experience of or story about the animal in question is relayed. The entry is closed always with a biblical reference. The story of the ass, as an animal sometimes despised and maltreated, but who has a divine association by having carried Christ into Jerusalem at the beginning of Holy Week, is not much of an imaginative stretch for the writer; the giraffe is a bit more of a challenge.

The animals are depicted in a foregrounding illustration to each section displaying them all together in a picturesque natural setting. These charming prints were the work of the prolific 19th century engraver, Joseph Martin Kronheim (1810-1896). Kronheim was born in Germany but sent most of his career in Britain, beginning in Edinburgh and then relocating to London where he worked from the centre of the publishing trade, Pater Noster Row. Kronheim developed a major innovation to the creation of printed illustrations in that he substituted zinc for wood as the receiving surface of the art work.