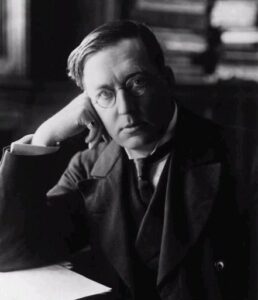 I remember when, aged 12, I took a book off a shelf in the school library and sat down to read it. The stories stayed with me long after I had forgotten both its title and author. Some four decades later, while discussing favourite ghost stories with friends, I described one of the stories and was told “Oh, that’s one of M.R. James’ stories.”

Montague Rhodes James was born in 1862, the youngest child of Herbert and Emily James. He was born in Kent but while still a toddler the family moved to Great Livermere in Suffolk where his father was to be the new Vicar.

The rectory at Great Livermere was a happy home and Suffolk became the setting for many of his stories including ‘Oh whistle and I’ll come for you, my lad’, probably his best-known story. Monty (as his friends called him) proved to be a very bright young man. He went to Eton in 1876 and in 1882 he arrived as an undergraduate at King’s College, Cambridge. He was to remain there until 1918, eventually becoming the Provost of King’s College.

It was as an undergraduate scholar that he began to catalogue all the medieval manuscripts in the university’s collection. In particular, he paid attention to the illustrations, the first time that this had been done. To this day, his scholarly works are still highly regarded.

I was thrilled to learn that the Museum’s Hart Collection has a copy of one of his academic works. Sadly, we will never know if Hart met Monty while he was at Cambridge, it seems unlikely.

However, today it is for his hobby that he is best remembered. Monty was highly sociable and outgoing, he was a member of the universities ‘Chit Chat Society’ and it was at one of their gatherings, in October 1893 that he read his first two ghost stories and in doing so revolutionised the English ghost story.

His ‘Ghost Stories of an Antiquary’ was published in 1904 and it remains hugely popular and was to be very influential on novelists, playwrights and filmmakers down to the present day.

If you haven’t read one of M.R. James’ ghost stories but would like to subject yourself to ‘a pleasing terror’ then go out and by a copy of his collected works, they aren’t expensive and, trust me, the tales he tells will linger long in your memory.