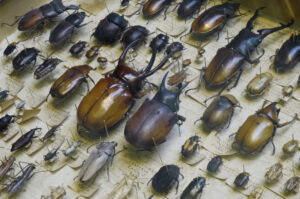 Whenever I am out and about and I meet someone who used to live in Blackburn, as soon as I mention that I work at the Museum I get asked two questions – “Have you still got the Mummy?” and “Have you still got the Beetles?”. Well the answer to both questions is “Yes” and today I’d like to share some of the information we have on the Beetles and their donor, Mr A C Bowdler.

Arthur Bowdler was a Victorian gentleman and an important figure in the early history of Blackburn Museum; from what we know of him, he was very much a man of his times.

Bowdler was born in the town of Kirkham in 1842; his family were well-to-do mill owners. The family were devout Christians, throughout his life Arthur supported the Congregational church, and was involved in charitable work.

After leaving school at fourteen, he moved to Blackburn and took up a career in business, becoming a manufacturing chemist. With a strong sense of civic duty, Arthur was very active in the town’s development, particularly the Museum. He donated several paintings to the Museum and in January 1914 he offered the Museum his collection of beetles, which we still have to this day.

So, why beetles? Victorians were very keen on natural history and collecting beetles, ‘Beetling’, was a very popular hobby in Victorian Britain; another, more famous, collector was Charles Darwin. Scientists believe there are 1.5 million species of beetle on the planet, meaning that one quarter of animal species are beetles. Hugely successful, they are found in every environment apart from the sea and the artic regions. 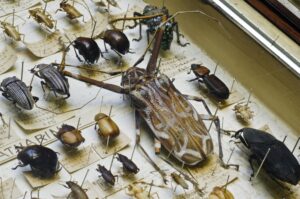 Mr Bowdler’s collection is of beetles from all around the world. In total there are over 2,500 species of beetle; of these 180 came from Britain and the rest from all over the world, especially North America and Africa. Each specimen was carefully dried and pinned inside a cork-lined case. There are 26 cases in all, containing 4,200 specimens. Labels saying where it came from and its scientific name, in Latin, accompany each specimen. The most spectacular specimens are the four Hercules beetles (Dynastes Hercules), these beetles grow to be up to 15 cm long, making them the world’s longest beetle. At the other end of the scale are numerous tiny beetles, that can only be seen with a magnifying glass; too small to be pinned, instead these specimens were carefully glued only small slips of paper.

Arthur Bowdler clearly loved his collection, in a newspaper interview he stated “No jewel ever flashed and blazed with greater brilliance than some of these gems which are among the despised of the Earth.” Sadly, Arthur Bowdler died in 1917, three years after donating his collection to the Museum. We are sure that he would be delighted to know that we still have his collection on display and that generations have gazed in amazement at his collection.