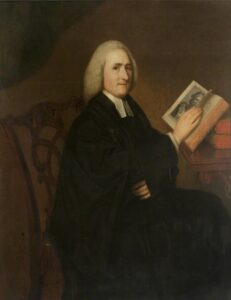 Born at Dalton-in-Furness, George Romney was acknowledged to be one of England’s greatest portrait painters.  He is said to have shown no special aptitude during his schooldays and was apprenticed to his father’s business as a cabinet maker at the age of ten during which time he learned make violins, an instrument he played throughout his life.

Whilst serving his first apprenticeship he developed a great interest in mechanics and spent his leisure time carving small figures from wood and constructing musical instruments.  An accidental acquaintance with Leornardo da Vinci’s ‘Treatise on Painting’ aroused such interest in him that his father apprenticed him, at the age of nineteen, to Christopher Steele, a painter in Kendal, who had studied in Paris under Vanloo.  When Romney’s connection with Steele terminated he spent five years in Kendal painting portraits.

He moved to London in 1762 where he gained the ‘Society of Arts prize’ a year later.  He visited France in 1764 and Rome in 1773, remaining there for two years.  On his return to England in 1775 he moved to Hampstead.  He finally returned to his family in 1799 and died 2 years later in Kendal.  He was buried at Dalton-in-Furness.

The Rev. Richard Scales (1723-1786) was sometime vicar of Ulverston, and was buried in the churchyard there.  He was a relative of Mrs R B Dodgson who bequeathed her collection of pictures to Blackburn Free Library in 1884.