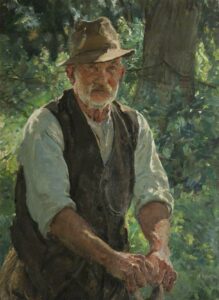 T C Dugdale was born in Blackburn 2 June 1880 and began his studies at Blackburn School of Art before continuing on to the Royal College of Art, London and then Academie Julian and the Academie Colarossi in Paris.  He specialised in portraits and some of his most famous sitters were Princess Margaret and the Foreign Secretary, Ernest Bevin, in 1948.  He also designed textiles and book covers.

Dugdale was an accomplished artist who exhibited work at the Royal Academy every year from 1901-1952 and on 18 February 1936 he was elected an Associate of the Royal Academy becoming a full member on 22 April 1942.k

As an active member of the British Army Dugdale served during World War I as a Staff Sergeant with the Middlesex Yeomanry in Egypt, Palestine & Gallipoli.  He continued painting throughout the war, depicting people and scenes from the areas in which he was based.  The British War Memorials Committee purchased four of those paintings.

During World War II Dugdale lived in Suffolk with his wife, Impressionist painter Amy Katherine Browning.  He served in the Home Guard and was commissioned by the War Artists Advisory Committee to paint portraits of serving merchant seamen and RAF pilots.

In 1949 he became president of the Blackburn Artist’s Society.

Mr Kersey, the sitter, is assumed to have been a gardener in Suffolk where Dugdale spent most of his adult life.