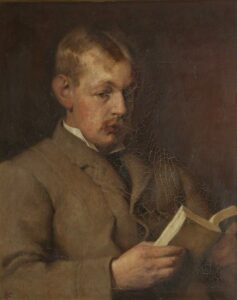 Thomas Boys Lewis was born at Billinge House, Blackburn, in 1869, the youngest child of Thomas and Ann Lewis.  Educated at Eton and King’s college, Cambridge, he graduated first class in the Classical Tripos, entering the cotton trade in 1892 with his brother Henry.  He guided the firm’s destiny for 28 years.  In his early days he attended at the Technical College as an unpaid teacher of Latin and Greek, but his largest educational gift to the town was the Lewis Textile Museum.  Opened in 1934 it represented the cotton trade over the past two hundred years, and contained many objects of historical and antiquarian interest, including working replicas of Hargraves’ Spinning Jenny, Arkwright’s Water Frame, Crompton’s Mule, and several primitive handlooms.

The preservation of Samlesbury Hall is another achievement of Lewis’s due to his generosity and public spirit.  For exhibition purposes Mr. Lewis lent a unique collection of cabinets which illustrate the development of this particular article of furniture in various countries over a period of four centuries.  For seven years he wrote annually a historical play to be produced in the Great Hall before the ‘Friends of Salmesbury’.  He also called in an old school-fellow, Sir Charles Holmes, formerly Director of the National Gallery, to paint a series of ten oils and thirty-three water colours with which to decorate the walls

Poet no less than scholar, his ‘Meditations of a Cotton Spinner’ published in 1929, contains much memorable verse, with an intimate note that will appeal to every native of the Borough.  At the Centenary of the Consecration of the Parish Church in 1926 he took a prominent part in its organisation, wrote over half the episodes and designed a model of the church showing how transepts and choir could be added to form a cathedral.

His first wife, Mrs Hillary Coddington Lewis, a talented artist in her own right, died in 1936; they had one son, Richard Boys Lewis.  His second wife was widow, Mrs Alice Smalley.